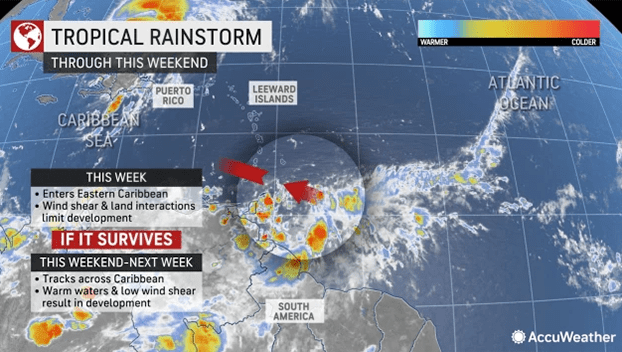 Forecasters are looking ahead to the next tropical threat behind Hurricane Fiona, which pummeled the Turks and Caicos Tuesday as a Category 3 storm and poses a threat to Bermuda and parts of eastern Canada later this week, and are cautioning about new development in the Atlantic basin that could be a danger to the mainland United States late in the month.

After the Atlantic basin was virtually dormant throughout August, the month of September has been crackling with tropical activity, and there are three candidates that could develop into named systems in the Atlantic over the next couple of weeks. The next three names on the Atlantic list of tropical storms this season are Hermine, Ian and Julia.

A system that was dubbed Tropical Depression Eight Tuesday morning over the middle of the Atlantic was further upgraded to Tropical Storm Gaston as of Tuesday afternoon. Gaston is not expected to be a threat to the Caribbean or North America, but it could wander close enough to the Azores to bring strong winds, rough seas and heavy rain as a strong tropical storm or perhaps a hurricane later this week and this weekend.

As of Thursday morning, Gaston was about 340 miles (550 km) west-northwest of the Azores, packing maximum sustained winds of 65 mph, and was moving east-northeast at 17 mph. With the storm drawing closer, a tropical storm warning is now in effect for the Azores.

A strong tropical wave over the western Atlantic was also showing signs of organizing on Wednesday.

Yet another system being monitored is a robust tropical wave that was located over western Africa Tuesday. As this system reaches the Atlantic and enters into an atmosphere that will be favorable for development, it could form and quickly ramp up into an organized tropical system by mid- to late week.

The system that is of greatest concern for people in the Caribbean, and perhaps the U.S., is a strong tropical wave, which AccuWeather is currently referencing as a tropical rainstorm. This same system is designated Invest 98L by the National Hurricane Center (NHC) and was located near the northcentral coast of South America Wednesday.

“This is the most significant threat for the U.S. mainland we’ve had this hurricane season,” AccuWeather Chief Meteorologist Jonathan Porter said.

“If the main brunt of the tropical rainstorm is able to avoid drifting over South America, it can evolve into a full-fledged tropical storm anytime through Friday while over the eastern Caribbean,” AccuWeather Lead Long-Range Meteorologist Paul Pastelok said. Even though initial organization and strengthening may be a bit slow with the system, it could begin to rapidly intensify as it reaches the central and western Caribbean from this weekend to early next week, Pastelok explained.

As the system moves along, it will encounter ideal conditions for a tropical system to thrive and strengthen, including bath-warm water, according to AccuWeather Hurricane Expert Dan Kottlowski.

Water temperatures are generally in the 80s F throughout the Caribbean, the Gulf of Mexico and the Florida Straits, and there are pockets of even warmer waters. Sea surface temperatures are close to 90 F in some places along the system’s projected path. That is sufficiently warm enough to sustain a developing tropical cyclone — and even warm enough for rapid strengthening should other environmental factors align.

Wind shear, or winds that can sometimes disrupt tropical storm formation or organization, is also expected to remain low along the system’s track.

At this early stage, and should the system develop, there is a broad zone over which the system may track. That track may depend not only on steering breezes but also on the intensity of the system. A quick-developing, strong system is more likely to turn to the north sooner rather than a weaker system or one that takes longer to develop into a cyclone.

It may also encounter land as it nears southeastern Mexico or Cuba, depending on which direction it takes — a factor that could limit the strength or organization of the system.

The same type of mechanism, a southward dip in the jet stream, that will keep Fiona away from the U.S., may not be prominent enough to prevent the same scenario for the southern U.S. this time around.

As the Caribbean system takes shape, another dip in the jet stream could develop over the U.S., potentially creating southerly steering breezes that could guide the storm into the U.S. along the eastern Gulf coast or the Florida Straits. Depending on exactly how the jet stream dip moves along, it could leave a pathway open for areas farther to the west along the Gulf coast to be impacted.

AccuWeather meteorologists say that there is a wide range of possibilities for future movement on the system, which has yet to bud in the Atlantic due to a variety of possible steering and development factors.

“At this early stage, U.S. interests from Miami to New Orleans should closely watch the evolution of this system,” Pastelok said. AccuWeather forecasters expect the system to reach major hurricane intensity and advise anyone living from the central and western Caribbean to the southeastern U.S. to stay tuned to the latest developments. Should the storm manage to reach the Florida Peninsula, there may be an avenue to move northward along the Atlantic Seaboard.

At this time, it does not appear that this system would be a threat to areas in the northeastern Caribbean, including Puerto Rico and the Dominican Republic, which were hit hard by Fiona.

This satellite image taken on Wednesday, Sept. 21, 2022, shows Hurricane Fiona (left), Tropical Storm Gaston (upper center), a brewing tropical rainstorm (lower left of center) and a tropical wave over the Atlantic (lower right of center) and a tropical wave over Africa (lower right). (AccuWeather RealVue™ satellite).
Another scenario is that it could bypass land and head straight for the Gulf of Mexico — a possible outcome that would allow the system to pick up strength quicker.

The 2022 Atlantic hurricane season has been largely inactive thus far this season. The basin generated seven named tropical systems to date, and the closest approach from a hurricane to the U.S. was several hundreds of miles away.

Hurricane Earl moved east of Bermuda to within about 800 miles of the East Coast at its closest approach. And on Tuesday midday, Fiona, while churning at Category 3 force, came as close as 600 miles from Miami.

AccuWeather forecasters say the system that may take shape in the Caribbean seems to be a substantial concern with multiple signals favoring strong development near the end of September.