A first time for everything: Mississippi veterinarian helps free dog after he gets head stuck in rim of old tire 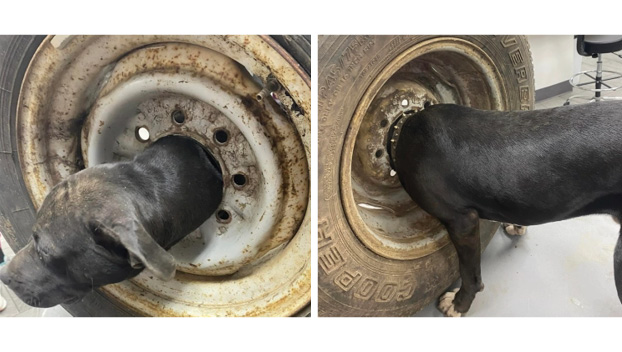 There is a first time for everything — even for a Mississippi veterinarian who has been working with animals for 30 years.

Veterinarian Bob Watson said he saw a first in his career when a dog came through the Brookhaven Animal Hospital doors on Friday with his head stuck in the rim of an old tire.

Watson said the dog had chased a large rat when the rodent sought shelter in the tire. The dog followed and got his ears through the rim and it prevented him from getting them out. His ears had abrasions and the pain was the biggest hurdle to getting the head to slide out.

Sedatives and lubricant were the solution Watson came up with to help get the dog unstuck. He said the sedatives were to help with the pain and get the dog to be still so he could free his head one ear at a time. Lubricant helped the ears and head slip out with ease.

Watson said some advice immediately came to mind as he thought about how to help the animal out. He said when his kids were younger they watched a Disney movie called Robots. The quote “See a need, fill a need,” from the movie has stuck with him ever since.

“It is good advice to live by in work and outside of work. See a need and fill a need,” he said. “It was the way we approach things at the hospital. You look at a situation and ask yourself ‘what do I need to do here?’ Every situation is unique and you have to do some problem-solving. Determine what needs to be accomplished and you execute it.”

“You never know what will walk through those doors. I was blown away by how sweet he was,” Watson said. “He was such a good patient. Some dogs would have been stressed and hard to deal with. He was the sweetest and goofiest dog and just a great patient to work with.”

They were able to reverse the sedatives and five minutes later the dog walked out with his owners. His tail was wagging the entire time he was awake.

It is one of a few funny stories he has collected in his time working with animals. Once, an elderly woman called the hospital about her Bassett Hound Beaner, he said. Beaner was having a hard time standing up and every time he stood up he would fall on his face.

She was concerned and wondered if perhaps it was a seizure or maybe he was paralyzed. Watson said she paused and told him she didn’t need his help after all. Beaner’s front legs were stuck in one sweater hole. Another lady once called because she thought her cat was having a seizure. The cat had a leg caught in his flea collar and was trying to get it free.

“You occasionally see things like that and it is funny,” he said. “As long as no one is injured. That is our main concern. We have had a lot of funny things happen and when it does it puts a smile on your face.”

People who have an animal emergency situation come up should call the Brookhaven Animal Hospital at 601-833-1223.