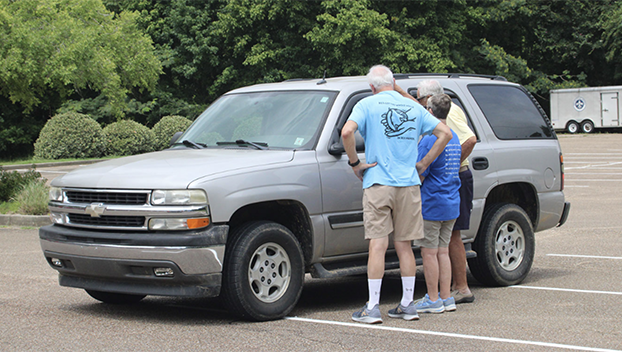 Members of Hawkins United Methodist Church's drive-thru prayer ministry talk with a visitor in the church parking lot. The ministry's members meet on the first Thursday of the month to pray for anyone who comes to the church. (Photo by John Surratt | The Vicksburg Post)

On a steadily warming Thursday morning in Vicksburg, a blue tent in the parking lot of Hawkins United Methodist Church in Vicksburg provided shade, and a small provided cooling air for five people sitting in lawn chairs and discussing different subjects.

At first glance, it appears they may be members of a church Bible study group or maybe just five friends who decided to get out of the house and spend some time together.

But this group has a special mission as anyone who follows the sign at the parking lot entrance and pulls up to the tent soon learns.

There are plenty of drive-thru restaurants in Vicksburg. One can get their prescription medication in the drive-thru and, if they venture across the Louisiana border, they’ll even be able to snatch up some drive-thru daiquiris.

At Hawkins United Methodist, you can receive a drive-thru prayer.

On the first Thursday of each month, members of Hawkins sit under that blue tent from 11 a.m. to 1 p.m. with the purpose of providing people traveling along Halls Ferry Road with prayer. It’s a quick and convenient way to receive a blessing without having to step out of the car.

“We started calling them (the church) and they sent us some stuff about it,” she said. “They told us to go with it and we did.”

“We started recruiting inside the church to come to do this,” Larry Holman said. “We have a prayer group that meets regularly in the chapel but they didn’t want to be outside.”

He said the initial team, including him and his wife, Lucy Young, Lin Cheslek and Bob Walters have stayed together since the ministry began.

Kay Holman said the group initially met in the early morning but later changed to afternoon to see if they received a better response.

Larry said the move has helped.

“There is no converting or preaching involved when someone pulls into the parking lot.

“People will come up and we ask, ‘What’s on your heart; what do you need?’” Larry said. “I think most of them say they welcome us praying for them. They’ll tell you by name who’s in their family or they lost someone; they’ll share that.”

“We’ve heard some sad stories,” Kay said. “Sometimes I think we’re more blessed than they are.”

Sometimes, Larry said, people will pray for them.

“It’s been a huge blessing for us,” he said.

“We say if we only have one it was worth it,” Kay said. “It’s like throwing that lone starfish in the sea; you’re saving that one.”

“We’re here the first Thursday of the month,” Walters said. “If we can provide comfort to someone we’ve accomplished our mission.”