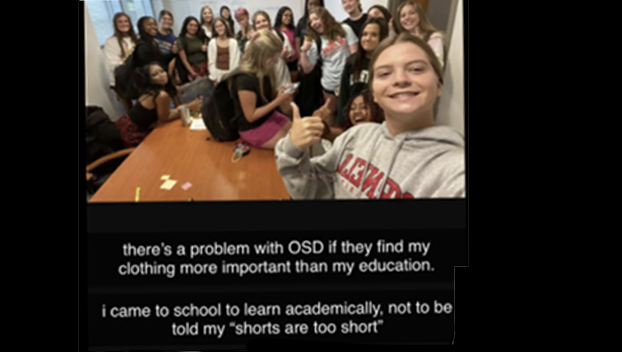 A new dress code has students and parents accuse officials in one Mississippi school district of targeting females with rules that are “incredibly tight and unfair.”

Students and parents at Oxford High School have started a petition and have gone public with their grievances against the school’s dress code.

Oxford Schools let back in for the 2022-2023 year on Monday, Aug. 1, and OHS students were faced with a dress code that banned clothing past a certain length. For students, that meant they could not wear skirts, shorts, or skorts and rips or tears above their mid-thigh.

Since school’s re-opening, students were cited for wearing skirts or shorts that did not reach mid-thigh or past their fingertips.

“This dress code has basically removed our freedom of speech from clothing, removed our ability to fully express ourselves, and caused many other problems in our students day to day lives,” he said.

In a Facebook post, parent Elizabeth Vaugh reiterated that the code is biased against female students but it also forces parents to buy more clothes for their children.

“This dress code policy is targeted to females. They added hoodies in the mix since they needed a predominantly male worn item,” she said. “If the district wants this much control then they need to go to uniforms. Parents go back to school shopping weeks before school starts. Are they going to cover the expense of buying additional clothing options after school has already started?”

Vaugh went to tag Oxford Superintendent Bradley Roberson in the message,” … were uniforms even considered?”

“We just do not want kids wearing any head gear (hats, hoods, etc) so students can be easily identified. We can never be too safe,” he said.

Advocates against the dress code enforcement, state that almost no store sells shorts that come to mid-thigh or even fingertip length.

“Many students here think we are being sexualized and think that the dress codes are unreasonable and stupid,” said freshman Mary Kay Booker in a message to The Eagle.

In a Snapchat update, Booker stated: “There’s a problem with OSD if they find my clothing more important than my education. I came to school to learn academically, not to be told ‘my shorts are too short.’”

Booker stated that some girls will get cited for wearing the banned clothing and others will not.

According to Booker, if students are coded for their clothing, they will be sent to the Principal’s office and made to wait for their parents to pick them up or bring them a change of clothes, making them miss time in the classroom.

“Oxford High School administration has a history of sexist code enforcement, and with the new administration it has only become more blatant,” Avery said to The Eagle. “OHS defends their rules and intense punishments— immediate detention if you are unable to change clothes— by claiming it is to protect girls from being sexualized and avoid classroom disruption.

“It is completely wrong to assume that male students even care. There will always be bad apples in a high school, no need to punish the bunch for their transgressions,” he continued. “We came here to learn, not to be objectified by the same people we are expected to respect.”

OHS’ senior class of 2024 reportedly created an online petition against the current dress code which currently has over 1,000 signatures from students and parents. Oxford High School Dress Code Petition

The Oxford School District has not released an official statement on the issue at this time.