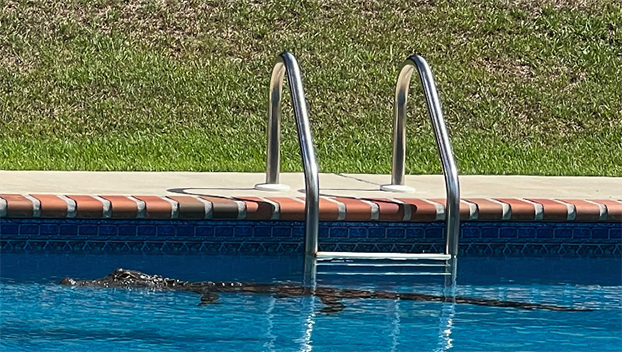 A 6-foot-long alligator was seen floating in the swimming pool of Sissy and Clay Hudson's home in Bovina on Friday. (Photo by Anna Guizerix | The Vicksburg Post)

A 911 call came in just after 10 a.m. Friday, alerting local authorities to a threatening impostor: a 6-foot-long alligator in a swimming pool on Boundary Line Road in the Bovina community.

Homeowner Sissy Hudson said the day started like any other. She’d let her two dogs out of the house, was giving some scratches to the cat she and her husband, Clay, keep outside and was preparing to eat breakfast on her back patio before work. Clay had turned on the automatic pool cleaner, and it was trolling along the bottom — or so Sissy thought.

“I walked out to eat breakfast on the back porch, and (the alligator) was just floating around in there,” Sissy said. “We’ve got two dogs, so I threw them in the house, and we’ve got a cat, so I got her put in the house as well.”

From there, Sissy said, she didn’t know what to do or who to call. The one thing that was certain, though, was that she wanted the gator to get gone.

“I called my husband, and he started heading home and suggested I call 911,” she said. “I felt silly calling 911, because it wasn’t a fire or a murder or an emergency; it was just an alligator somewhere it wasn’t supposed to be.”

Warren County Sheriff Martin Pace, who responded to the scene, stated that, in any emergency, no matter how big or small, residents should call 911 when they’re in need of assistance. Especially in the case of a nuisance alligator, Pace said it’s better to involve local authorities than it is to attempt to wrangle the reptile on one’s own.

While the Hudsons’ yard was buzzing with activity as deputies with the Sheriff’s Office and Mississippi Department of Wildlife, Fisheries and Parks personnel arrived on-scene and readied the area for removal of the animal, the many-toothed alligator decided to swim a few laps underwater, surfacing occasionally.

Pace, together with MDWFP Lt. Lee Harvey, successfully removed the alligator from the pool and secured it in a matter of minutes. Estimated to be between 7 and 8 years old, the alligator was unharmed and transported to a more suitable environment.

“We never disclose where we release alligators, but I will say it’s a more natural habitat,” Pace said. “It’s a place where the gator is free to be a gator.”