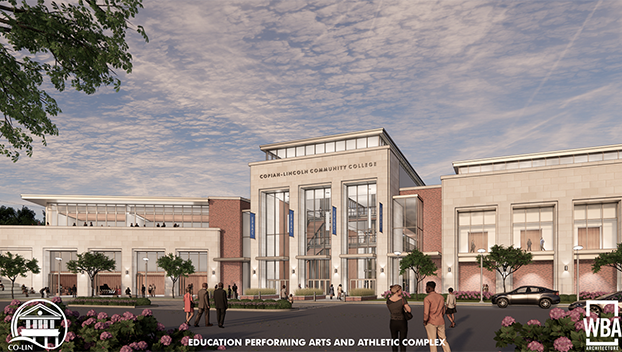 A Mississippi community college is looking to build a new performing arts center and athletic arena and asks local leaders to make a monetary pledge to help make it happen.

Officials at Copiah-Lincoln Community College are asking Lincoln County to pledge $400,00 to help build a new performing arts center and athletic arena on the Wesson campus.

Co-Lin’s president, Dr. Jane Hulon Sims, asked for the funding during the supervisors’ meeting on Monday, adding that the Copiah County Board of Supervisors has agreed to provide $100,000 a year for four years to help fund the project.

“The economic development potential from this project will impact both counties,” she said of the proposed new performing arts and athletic arena. “I know it’s not surprising that I would say that Co-Lin is special, but I do believe that it’s true. This building is sorely needed in our area, and those who come to it will need to eat, to sleep and to shop.”

She said 20 percent of Co-Lin’s students come from Lincoln County and the school’s tuition is still the lowest in this part of the state. “Four of our six Hall of Fame members come from Lincoln County,” she added as to why the supervisors might be interested in funding the building of the center. “We have the highest graduation rate in community colleges in the state, and our ladies’ softball team just won state.”

The state-of-the-art facility on the Wesson Campus would house both a new performing arts center and an athletic arena, including a partnership between Co-Lin and the Mississippi School of the Arts. Construction is expected to begin next year.

The Educational, Performing Arts, and Athletic Center (EPAAC) will include a 1,500-seat performing arts theater and a 2,000-seat athletic arena with shared ticketing, concessions and restrooms, as well as a lobby area that serves as the middle between the two structures.

Hulon Sims said in a news release that both Co-Lin and the Mississippi School of the Arts have expanded their partnership to benefit the students of both institutions. In that same release, MSA Executive Director Dr. Suzanne Hirsch said “the performing arts center at Co-Lin will enable us to have larger productions and provide an educational opportunity to industry standards better preparing them for their artistic careers.”

The 2,000-seat athletic arena would allow the college to host area tournaments, graduation and commencement ceremonies for local high schools, and other community events. Co-Lin’s men’s and women’s basketball teams will re-locate from Mullen Gymnasium (built in 1957) to the EPAAC and have new locker rooms, laundry facilities, and coaches’ offices.

The college reported that it will use a “braided funding strategy” to pay for the EPAAC, combining funding from federal grants, local and state support, corporate sponsorships and an aggressive fundraising campaign currently underway.

The supervisors thanked the Co-Lin coalition for coming, saying they would take the matter under advisement.