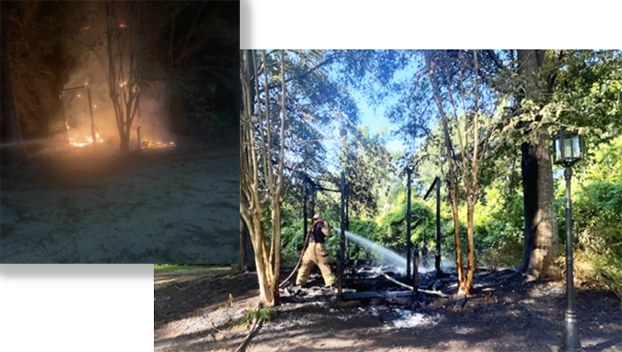 A man has been arrested after a gazebo at a Mississippi park and trail burned to the ground.

Firefighters were called to the Longleaf Trace Park just after 3:00 a.m. Tuesday morning after a fire broke out at the back gazebo.

Officer Barron of the Prentiss Police Department noticed the fire while she was patroling.

The Longleaf Trace is a 44-mile long running, biking, hiking, and equestrian trail that extends from Hattiesburg through Sumrall, Bassfield, and Carson to Prentiss. A Rails-To-Trails conversion, the trail is 10 feet wide and paved.

When firefighters arrived the gazebo was fully engulfed and there was no one around.

According to authorities, surveillance cameras in the park showed a male subject setting the fire and walking away.

Within an hour-and-a half, officers apprehended Edward Kylons at the Exxon Fast Mart on the south end of town. Kylons was charged with malicious mischief, which carries a possible 10-year sentence.

He was also charged with possession of drug paraphernalia and tresspassing, and booked into the Jefferson Davis County Jail.

“I appreciate the officer’s quick response to the situation and apprehension of the suspect,” said Prentiss Police Chief Joe Bullock. “We are thankful for the multiple cameras throughout the park that also played a role in this case being solved so quickly.

The gazebo was built not long after the park opened. All gazebos and benches in the park were dedicated in memory of loved ones. It was completely destroyed.