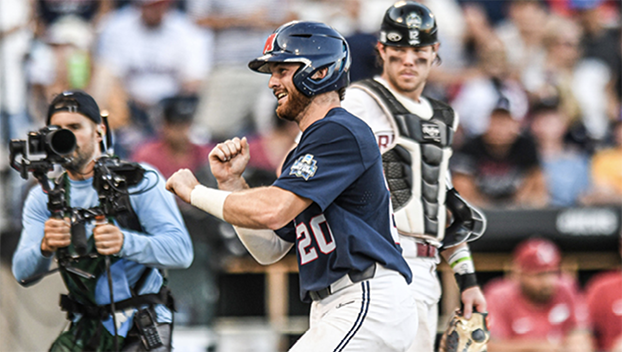 Okay, maybe that’s not entirely the case, but the Rebels’ inconsistencies this season have closely mirrored those of the second-year utility man from Peosta, Iowa.

Both Harris and the team as a whole jumped out to incredibly hot starts at the beginning of the year, and fell into brutal slumps midway through the season before turning it around in the postseason—where they now stand on the precipice of history with two chances to reach the College World Series final for the first time in the 139-year history of Ole Miss baseball.

Harris racked up base knock after base knock at the bottom of the lineup while filling in for injured catcher Hayden Dunhurst early in the season, and his production out of the nine-hole helped Ole Miss jump out to a 9-0 start and a top-five ranking in the country.

His success in Dunhurst’s absence also earned him a spot as the go-to left-handed bat in the designated hitter spot after the Rebels’ primary backstop returned to action against UCF in early March, but an injury to his oblique muscle in the second game of that same series left him sitting on the sidelines for nearly a month.

Harris returned to action against Tennessee on March 25, coming off the bench as a pinch-hitter in the eighth inning and drawing a walk against Volunteers reliever Mark McLaughlin (one of just eight walks McLaughlin issued in SEC play).

He followed that up with a three-hit performance against North Alabama in which he logged a career-high five RBIs, including two on a home run in the second inning that gave Ole Miss an early lead.

Then, in a blink of an eye, his production came to a screeching halt.

He recorded just six hits in his next 17 games as he struggled to find a rhythm against a grueling slate of SEC opponents.

Harris knew something was wrong with his approach, so he began tweaking his load on his swing during batting practice sessions in order to generate more balance in his stance.

The load is a crucial part of a batter’s swing in baseball that involves shifting weight to the back foot in preparation for an explosive shift swing.

It often involves a leg kick, a toe tap or some other subtle movement that helps regulate rhythm and timing to create consistent, compact swings.

In Harris’s case he shortened his stride from a shin-high leg kick to a more subdued horizontal step, providing more balance throughout his swing and preventing his right foot from rolling over on the follow-through.

“I kinda changed up my load a little bit and feel a little bit more comfortable,” he said. “I get a little more movement at the plate… I feel good with it.”

Harris debuted the new stride in a midweek matchup against Southern Miss on May 11, where he recorded his first hit in nearly a month in a 4-1 win over the Golden Eagles.

He saw inconsistent playing time over the final two weeks of the regular season as he adjusted to the new approach, but finally got a chance to prove himself in the Coral Gables (Florida) regional final against Arizona after center fielder T.J. McCants went down with a thumb injury.

He took advantage of the opportunity, recording a pair of hits including a two-RBI double in the middle of an eight-run sixth inning as the Rebels beat the breaks off the Wildcats to secure a third straight trip to the Super Regionals.

Harris continued to excel in the Supers, going 3-for-7 with two walks and two runs scored to help Ole Miss reach the College World Series for the first time since 2014.

The talented sophomore has performed even better in Omaha, recording two hits in a win over No. 14 Auburn before breaking out with a career performance against Arkansas on Monday night that propelled the Rebels to their third College World Series semifinal in program history.

Two of those RBIs came on a 363-foot, two-run home run in the fifth inning that earned him a shout-out on Sportscenter and extended the Rebels’ lead to 8-3 in the middle innings.

The performance improved his average to .500 in the postseason, where he is batting 11-for-22 with three walks, six RBIs and six runs scored.

And as Harris keeps on hitting, the Rebels keep on winning.

Ole Miss is now 7-0 in the NCAA tournament and three wins away from the first national title in program history.

The Rebels never got down on themselves when the going got tough, and now their determination is paying off on the biggest stage in college baseball.

For Harris, it was all about staying ready and waiting for his opportunity to prove he could contribute to winning.

“I’m just trying to do whatever I can to help the team win. Wherever they tell me to go that day—I’ll go out there, put that glove on and do the best I can.”

Why was the gator caught outside Mississippi food stamp…