Why was the gator caught outside Mississippi food stamp office? Facebook users respond with jokes about economy after reptile captured 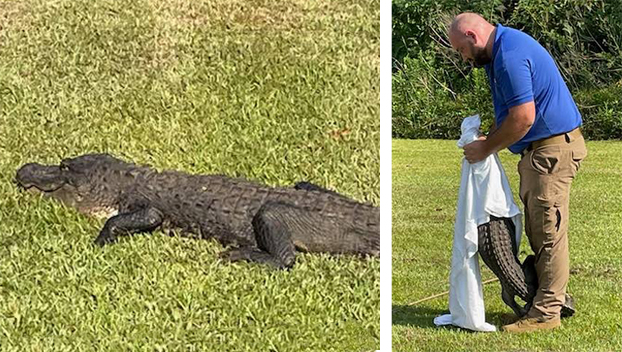 Social media users took the bait when an alligator was caught waiting outside a Mississippi food-stamp office Monday.

The Perry County Sheriff’s Office posted about the gator being caught outside the state Supplemental Nutrition Assistance Program office in New Augusta.

The alligator became the punchline for many Facebook comments about how times are getting tight, even for hungry reptiles.

Perry County Emergency Management Director Colby Prine caught the gator and released it into the nearby Pascagoula River.

“Times are getting rough he was trying to apply for assistance..lol,” on reader commented, to which another user responded, “He needed some fuel stamps.”

Another user commented, “He just wanted his hand out too,” to which another commentor replied “or just a ‘hand'”

Even the Perry County Sherrif’s office took the moment to have some fun in the post it made on Facebook.

“After making contact with the alligator, she (just found it was a female) became hostile and was taken into custody by our Perry County EMD, Colby Prine. She was taken out to the Pascagoula River and was released on her own recognizance and will appear later in court for disorderly conduct.”

Another user shrewdly commented, “I feel like he’s not going to make it back for court!”