Former auditors question whether White was too close to investigate Bryant 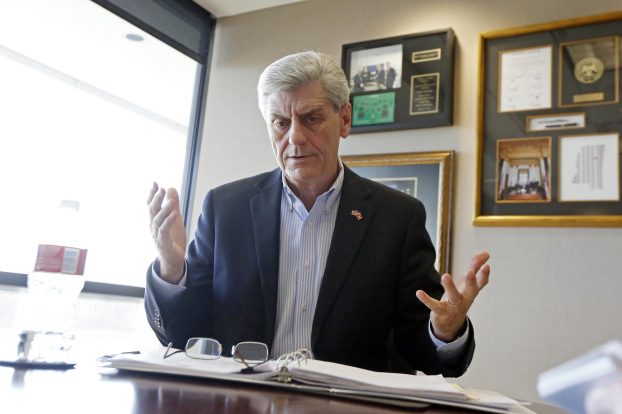 by Geoff Pender and Anna Wolfe

Three former state auditors say they would have recused themselves or limited their involvement in the investigation into Mississippi’s welfare fraud scandal to avoid perceptions of conflict of interest due to current auditor Shad White’s close relationship with former Gov. Phil Bryant.

White and his office identified the misspending and possible theft of tens of millions of dollars in federal money meant to help the state’s poor. But Bryant’s responsibility in directly supervising his welfare department director and the fact that some of the taxpayer money flowed to people and programs favored by the former governor are notably missing from his extensive audit report.

White also faced questions early on — and criticism from the U.S. Attorney’s Office — as to why he didn’t promptly bring in federal authorities, who have massive investigative resources, particularly since the malfeasance involved federal tax dollars.

The spotlight on White has grown more intense in the wake of Mississippi Today’s “The Backchannel” investigation, which showed Bryant using private texts to influence his welfare director and try to broker a deal with a pharmaceutical startup that enticed him with stock in the company.

Bryant has since acknowledged that the content of his messages “doesn’t look good,” but while the auditor’s office has possessed the records for over two years, it concealed them from the public and has not made any indication it has further investigated the matter.

White’s relationship with Bryant goes back more than a decade. He served as policy director when Bryant was lieutenant governor and was his gubernatorial campaign manager in 2015. Bryant appointed White as state auditor, a job that has been a launching pad for runs to higher office, and supported him in his subsequent election.

Those connections have helped cast doubt over the independence and rigor of the state welfare investigation led by White.

“The rule that I lived by was if there is any question whatsoever, don’t do it,” said Pete Johnson, who served as state auditor from 1988-1992, and ran unsuccessfully for governor, losing to Kirk Fordice in the Republican primary in 1991. Johnson said under similar circumstances, if he had such connections to someone potentially involved, he would have recused himself or limited his role in the investigation.

“You’re not only jeopardizing your integrity but the integrity of the purpose you’re pursuing … Those facts raise the question of whether or not it passes the smell test,” Johnson said. “And when those facts are looming out there, you’ve got to back off and ask will my involvement jeopardize the integrity of the investigation … I think (White) is a man of high integrity, but you asked me personally what I would do and that’s it.”

Former Mississippi Gov. Ray Mabus served as state auditor from 1984 to 1988. He worked closely with federal authorities in the “Operation Pretense” investigation and prosecution of widespread county government corruption across Mississippi. Mabus said that given White’s ties to Bryant, he should have handed off his lead role in investigating to someone else.

“Look, if you’re going to give the taxpayers confidence that investigations are being done impartially and objectively, even if this one is being done that way, it’s never going to look that way because of their closeness, and nobody’s going to believe that punches weren’t pulled,” Mabus said.

“… I guess a similar situation would have been if I ever learned something about (former Gov.) William Winter, whom I worked for as governor and a little bit on a campaign and I was his legal counsel,” Mabus said. “William Winter is the very last person who would ever do anything like that, but if I had come across evidence, I would have removed myself. Especially if I wasn’t going to take strong action on it, I would turn it over to somebody else.”

Steve Patterson was state auditor from 1992 to 1996, when he resigned after pleading guilty to a misdemeanor charge of using a false affidavit to buy a car tag. In 2009 he was sentenced to two years in federal prison for his role in a judicial bribery case.

Patterson said that were he in White’s position, “I would hope that I would have recused myself or brought the attorney general in to do the investigation.”

“Having said that, it’s a timing thing,” Patterson said. “You get those complaints that come in, and it’s what did you know and when did you know it. Knowing what we know now, clearly he should have recused himself and should be recusing himself now.”

White as auditor has burnished a reputation as a hard-charging defender of state tax dollars, and was credited with unmasking a massive scheme in the 2019 welfare scandal. But some holes in the audit have since emerged, especially relating to Bryant’s involvement behind the scenes.

The Mississippi Today investigation revealed that the former governor assisted a company called Prevacus, which improperly received welfare money, and he was poised to receive stock in the company until White’s office made arrests and announced its investigation.

The text messages between Bryant, the owner of Prevacus and retired NFL star Brett Favre have been in the possession of the auditor’s office for more than two years. They show the two men telling Bryant the company had received public funds, and that the governor intended to make his own business deal with Prevacus after he left office. But White did not reveal that storyline to the public.

Instead, White has credited Bryant as the “whistle blower” who prompted his investigation, and said that it was Bryant’s welfare director’s responsibility to know the law and refuse any improper directives from the governor.

Questions about if and when White’s office alerted other authorities to the text messages remain. The auditor’s office refused to turn the messages over to Mississippi Today after a public records request, and the outlet has a pending Ethics Commission records complaint against the office.

White and numerous other officials have declined comment on the case for months citing a gag order from a state judge.

But in an October 2021 interview with Mississippi Today — before the judge strengthened the gag order in the case to further restrict White — the auditor said he had not seen instances of Bryant directing his welfare chief to spend federal money on specific programs. Mississippi Today later obtained communications between the governor and principal players in the scandal discussing the allocation of financial aid.

White also said then that it was the welfare director’s duty to reject improper requests from the governor, not the governor’s responsibility to know the rules and laws.

An early oddity in the auditor’s probe came when White went to the Hinds County District Attorney’s Office — notoriously understaffed and suffering huge backlogs of cases — after he launched an eight-month investigation without notifying federal authorities.

Then-Southern District U.S. Attorney Mike Hurst in early 2020 issued a release noting, “We in the United States Attorney’s Office and the FBI only learned … from media reports about the indictments and arrests, at the same time the general public did.”

“While we commend the reported actions, neither the FBI nor the United States Attorney’s Office was contacted by the State Auditor or the Hinds County District Attorney about this investigation, although millions of federal dollars are alleged to have been stolen.”

White at the time said that his office moved swiftly and without notifying or involving federal authorities so as to halt the scheme before any more money was misspent or stolen. White has pointed to slow action by federal authorities as justification for his agency investigating and making the arrests. More than two years later, federal authorities have not brought any charges related to the welfare scandal.

White did face questions about Bryant, given that the former governor’s director of human services and close friends of Bryant were among those arrested and indicted, and the malfeasance appeared to involve programs or companies Bryant had championed. But shortly after the arrests, White said that then-Gov. Bryant was actually the whistleblower who prompted the auditor’s office investigation.

Federal criminal investigations are notoriously slow, but also notoriously thorough. Their vast undercover, wiretap and other resources allow the FBI and DOJ to cast wide nets over criminal conspiracies.

Hurst, in his statement at the time of the arrests, noted, “Investigating and prosecuting cases of this magnitude and complexity is routinely what the FBI and U.S. Attorney’s Offices do here in Mississippi and around the country.”

Hurst, a Trump administration appointee who left office in early 2021, declined a recent request for comment on the case.

White has said that after his initial eight-month investigation and arrests, he has involved federal authorities and turned over everything his investigators have.

Nearly three years after the massive scandal involving at least $77 million in misspent or stolen federal welfare dollars, the state Department of Human Services on Monday announced a civil lawsuit attempting to claw back $24 million from famous former athletes and pro wrestlers — including Bryant’s friend Brett Favre and Ted “The Million Dollar Man” DiBiase – among others.

It’s unclear where any continuing federal or state investigations stand at this point. No further arrests have been made since White’s office initially arrested six people in February of 2020 — Bryant’s head of DHS and another agency employee, former pro wrestler Brett DiBiase, a nonprofit and private school owner and her son and an accountant that worked for them. Four out of six have since pleaded guilty to state charges.

In a statement about the DHS lawsuit White said: “We will continue to work alongside our federal partners — who have been given access to all our evidence for more than two years — to make sure the case is fully investigated.”

Bryant’s appointment of his former campaign manager and policy director White as state auditor in 2018 was something of a surprise to most political observers. Bryant said at the time that he wanted someone with “independence” who did not have numerous political relationships and ties to the government officials and institutions he would be auditing.

At White’s swearing in as auditor after he appointed him, Bryant said: “When I was auditor, I used to enjoy saying, ‘In God we trust. All others, we audit.’ Shad, you’re welcome to use that.”