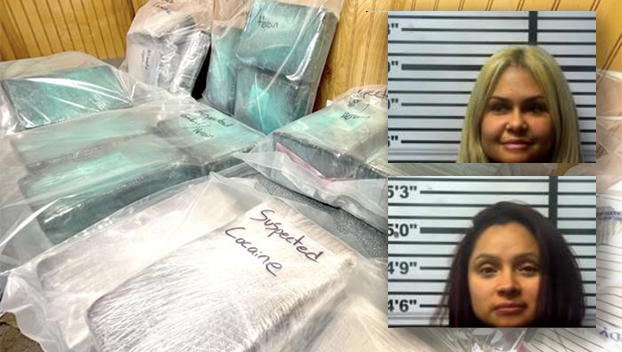 More than $5 million in drugs bound for New York City and other metro areas was seized by deputies when they made a traffic stop on the interstate and found 55 pounds of cocaine, heroin and fentanyl in a hidden compartment inside the vehicle.

Deputies with the Jones County Sheriff’s Department made a traffic stop Thursday night on Interstate 59 North near the 104-mile marker shortly after 10 p.m.

During the traffic stop, deputies found evidence of possible illegal activity and asked the two female passengers for consent to search the vehicle. The driver initially gave and then rescinded consent.

A search by K-9 officer discovered the presence of narcotics near the rear of the vehicle leading to probable cause for a search. JCSD narcotics agents searched the vehicle and located 25 kilos of heroin, fentanyl, and cocaine in a well-hidden compartment in the vehicle.

Deyci Delapaz, age 32, of McAllen, Texas and Anagabriela Peña, age 18, of Bronx, New York were both arrested and charged with Aggravated Drug Trafficking

The total weight of heroin, fentanyl, and cocaine was approximately 55 lbs or 25 kilos, officials said.

“There is enough fentanyl in just the one kilo of mixed heroin and fentanyl that was seized and tested to kill half the population of Jones County,” JCSD Narcotics Division Sergeant Jake Driskell.

One kilo of the fentanyl seized, Driskell said. was enough to kill half the population in Jones County.