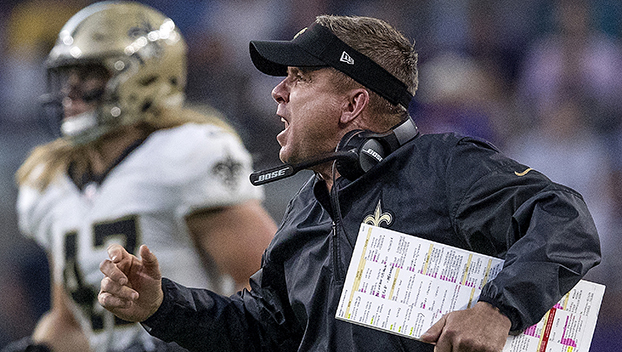 Saints coach Sean Payton is displeased with a call by the referees in the first half Monday night, Sept. 11, 2017 at U.S. Bank Stadium in Minneapolis, Minn. The Vikings won, 29-19. (Carlos Gonzalez/Minneapolis Star Tribune/TNS)

New Orleans Saints coach Sean Payton, whose 15-year tenure with the club included its only Super Bowl championship and also a one-season suspension stemming from the NFL’s bounty investigation, is leaving coaching.

Payton informed the team on Tuesday that he is leaving his first and only NFL head coaching job with a 152-89 regular-season record — and nine playoff appearances — in 15 seasons. The Saints won the NFL title in 2009.

“I don’t like the word retirement,” he said. “I still have a vision for doing things in football. And I’ll be honest with you, that might be coaching again at some point. I don’t think it’s this year, I think maybe in the future. That’s not where my heart is right now.”

The Saints made Payton a first-time head coach in 2006, when he oversaw a stunning turnaround in the franchise’s first season back in New Orleans following Hurricane Katrina. The club had been displaced from the city during the entire 2005 season, going 3-13.

The Saints went 10-6 and advanced to the NFC championship game in Payton’s first season. He has coached the Saints to the postseason eight other times in his 15 seasons since.

New Orleans narrowly missed the playoffs this season, going 9-8 in its first campaign since the retirement of Drew Brees. Payton had lured the quarterback to New Orleans as a free agent in 2006 and Brees went on to set every significant franchise passing record.

Under Payton, the Saints became a perennial contender, and they beat Peyton Manning and Indianapolis 31-17 to win their lone Super Bowl. They also lost the 2018 conference title game to the Rams after a blown officiating call that led to a temporary NFL rules change.

Payton was a member of the league’s powerful competition committee from 2017 until leaving that position last November.

“I don’t know what’s next,” he said. “Look, I read the reports and I understand. I’ve not spoken to anyone from a media outlet relative to doing television, or radio. Maybe that opportunity arises. But every time I read something that says he’s in line for this job, I’ll call my agent Don (Yee) and I’ll say ‘Don did you hear something because I’ve not heard anything?’ That’s OK. I think I’d like to do that. I think I’d be pretty good at it.”

A valued offensive assistant for the Eagles, Giants and Cowboys before landing the head coaching job in New Orleans, Payton actually played in the NFL — as a replacement player for the Bears during the 1987 strike.

He missed the 2012 season when the NFL suspended Payton, assistant coach Joe Vitt, general manager Mickey Loomis and four players after an investigation found the Saints had a performance pool offering cash rewards for key plays, including big hits. The player suspensions eventually were overturned by former NFL Commissioner Paul Tagliabue, and Payton was reinstated early in 2013.

Including playoffs, Payton has a 161-97 record, by far the most victories of any Saints coach. Jim Mora, who coached New Orleans from 1986 to 1996, is second with 93.
Payton’s 152 regular-season victories rank 21st in NFL history. Payton has presided over seven NFC South titles.

Payton made his mark as an innovative designer of offenses and play caller, coinciding with Brees’ extraordinary production. The Saints never led the NFL in offense before Payton arrived but finished first in that department six times since: in 2006, 2008, 2009, 2011, 2014 and 2016.

The Saints ranked first in scoring in 2008 and 2009. They ranked in the top 10 offensively for 14 consecutive seasons from 2006-2019. Although Payton wasn’t coaching in 2012, his offensive coordinator, Pete Carmichael Jr., was calling plays based on the principles of the offense designed.

In 2020, Brees’ final season, the Saints, went with more of a ball-control attack featuring running back Alvin Kamara and ranked 12th offensively. This season, however, New Orleans dropped to 28th in offense.

Payton also had to miss a game in 2021 after contracting COVID-19 for the second time since the spring of 2020.

Defensive coordinator Dennis Allen stepped in as acting head coach for that game, which the Saints won 9-0 at Tampa Bay. Allen, a former head coach with the Oakland Raiders, has made no secret of his desire to be in charge again.

Now there’s an opening on the very team that employs him.

Officials looking for Mississippi man who went missing after…