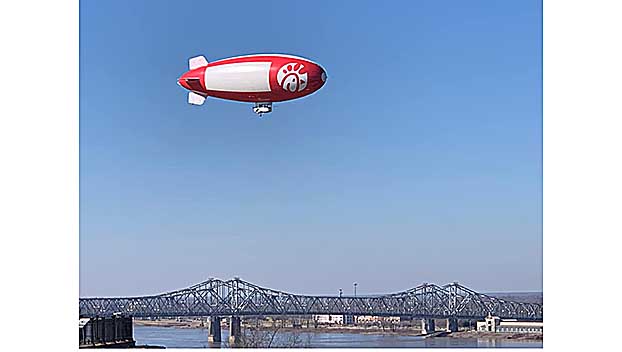 A red and white blimp emblazoned with the Chick-Fil-A logo thrilled and amused residents across central Mississippi early Saturday.

The company has been hired by Chick-Fil-A to fly the blimp with the Chick-Fil-A marketing information on it at the Super Bowl LVI on February 13 at SoFi Stadium in Los Angeles, California.

Dillard said the blimp was only traveling at approximately 25 mph so they don’t expect to make it to California for several days.

“We’re hoping we can get there in seven to 10 days,” he said after landing in Texas late Saturday. “We plan to get to San Antonio tomorrow and then we’ll shut down for a few days due to weather ahead of us.”

Dillard said they took a more southern route than planned due to colder weather to the north.

Although clearly marked with the Chick-Fil-A logo, the airship also had a large blank area that will presumably be filled with an additional marketing message once it arrives in California.

Since airships are pretty rare in skies across most of the south, so it didn’t take long for residents to notice and comment on social media.

“Great they have an Air Force now,” wrote Bryant McGee in jest.

Most commenters were hopeful the airship was a food delivery vehicle.

Coronavirus continues to spread rapidly across Mississippi, 1 in…