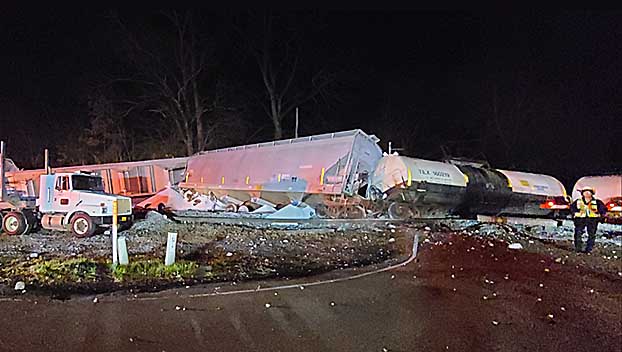 According to County Fire Coordinator Jerry Briggs, a portion of Bovina Drive is blocked off and will be blocked for some time.

“The intersection is impassable and will be that way for a while,” Briggs said. “The derailment tore up the tracks and there is some leakage coming from the train cars.”

Briggs said as of 8:15 p.m. Tuesday that local crews were working to verify which substances were leaking from which derailed train cars. Warren County Emergency Management Coordinator John Elfer confirmed that the Mississippi Department of Environmental Quality (MDEQ) was also on its way to the scene.

Some of the derailed cars, he said, were hauling sodium hydroxide, more commonly known as caustic soda or lye. The substance is most commonly used in textiles, pulp and paper, soaps and detergents, and for electroplating.

Sodium hydroxide is a corrosive substance that can react with moisture from the air and may generate heat as it dissolves, according to the Centers for Disease Control. This heat can be enough to cause a fire if the substance is near flammable materials, according to the CDC, and prolonged exposure can result in negative health effects.

New coronavirus cases in Mississippi have nearly doubled in…