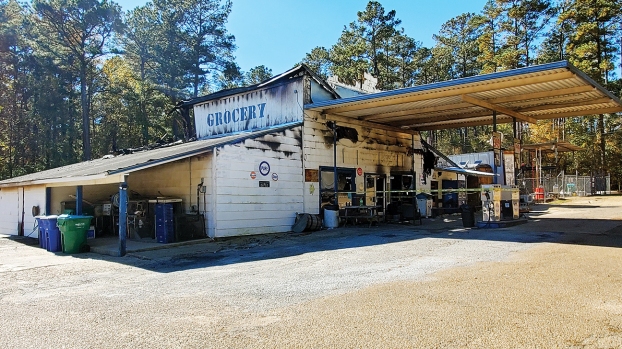 One of Lincoln County’s oldest businesses was destroyed in a blaze Saturday afternoon.

Case’s Grocery was established in the late 1940s to early 1950s, when Lonnie Case built and opened it for business. Now owned by a different set of Cases, who purchased the store from Lonnie Case in 1953, the store is a landmark and icon for the community.

Tammy Case Williford and her aunt Janice Case Britt have operated the store daily for years. Williford said she, her husband, son and a friend all left the store Saturday at the same time. She turned off the gas, then the lights and locked the door at 1 p.m., the store’s regular weekend closing time, before driving the short distance to her home.

At 1:12 p.m., a friend drove past the store and saw smoke coming from the back of the building. She called 9-1-1, then Williford.

“Just within the two to three minutes it took me to get back to the store, smoke was rolling,” Williford said. “It’s crazy how fast it progressed.”

The heart pine and contents of the store were burned up by 1:30 p.m., the nearly 69-year-old property a total loss “in a matter of minutes,” according to Williford.

For the majority of its existence, the community store has been the locale of political rallies for any candidate whose name was on an upcoming county ballot to be able to make a last pitch to voters prior to election day. Hundreds of people attended each rally.

No one was injured during as a result of the fire at 1261 California Road NW, according to Lincoln County Emergency Management Director Chris Reid.

“It’s currently an unknown cause and a total loss,” Reid said.

Williford and Britt consider their customers family, and interact with many of them on a daily basis. Britt said they have a personal relationship with everyone who has come through the door.

“We have a great community and dedicated customers,” Britt said. “The majority of our daily customers were down here Saturday afternoon. They were as upset as we were.”

“The community support has been overwhelmingly awesome,” Williford said. “I honestly think if we called any of them, they’d show up to help in any way they could.”

Macedonia Baptist Church Student Minister Nathan Case said although he is not related to the family who owns the store, he grew up nearby and they have always treated each other as family.

“Few places on this earth mean more to a community than Case’s Grocery,” the minister said. “The corner of California Road and Hilltop Lane is not just an address, it’s a way of life and a part of history. The mere mention of ‘James and Johnny Mae’s’ brings memories that few people are blessed to have. Toke, Eleck, Nora Bell, Big Cary were names I knew before I could even talk. There were conversations had and prayers prayed at the store that made people realize the power of both. This wasn’t just a place for gas, oil, Nehi’s or lunch meat — far from it. It’s a place that is a large part of making people better just by walking in the door. It’s more than just four walls, it’s home to legions of people blessed to call Hilltop home.”

All eight of the county’s volunteer fire departments responded to the fire, as well as a ladder truck and crew from Brookhaven Fire Department. Lincoln County Sheriff’s Office deputies also responded. A little more than two hours after the blaze was reported, fire fighters were ensuring all hot spots were fully extinguished.

The big concern for those fighting the fire was the proximity of the fuel tanks. Though the tanks themselves are underground, they vent at the side of the store, so the vents had to be continually hosed down to avoid fumes being exposed to a spark.

“All the fire fighters gave 100%, even though they knew it was a loss, and everyone offered more help,” Williford said. “I have always respected them, but I have a whole new respect for them. They’re amazing and I feel like they really do care.”

“We really can’t say enough about the volunteers who came,” Britt said.

Williford posted the following on the Case’s Grocery Facebook page Saturday night: “As bad as it was, thankfully no one was inside the store when it happened, so everyone is safe and sound. We are utterly heartbroken. We would like to send our sincere gratitude to all the fire fighters who fought the fierce blaze with nothing but pure selflessness, family, friends, customers, and our whole community for their kind words, hugs, encouragement, comments, texts, and calls, but mostly for the amount of love and support shown to us from everyone.

“Please know that it will never be forgotten and we greatly appreciate each and every one of you from the bottom of our heart. Although it is completely devastating for us, we know that our God has a reason for everything that happens, so with that being said … we will continue to lean on and look to Him for guidance during this time.”

It was hard to see the building burn — in the hearts of the owners and many customers it was like losing a family member. Though it was “just things that can be replaced,” the hardest loss for Williford was probably a single item of furniture — the chair her father, Robert “Bob” Earl Case, sat in every day. Bob died five years ago.

“It was his chair. I feel like that’s the last thing we had left of my daddy,” Williford said. “One of the fire fighters tried his best to get it out for me, but I told him not to try to do that.”

Now the big question on the minds of many is if Case Grocery will rise again from the ashes.

“We feel like we have to rebuild something — for us and the community,” Williford said.

The 12-foot-long metal Case’s Grocery sign is covered in smoke stains and lies on the floor of the Cases’ grill just across Hilltop Lane. It will be cleaned and hang once again on the front of whatever the family rebuilds. A piece of their past, it will carry over with them into the future.

“We will get back up and running with fuel delivery as soon as possible,” Williford said. “Hopefully by the end of the week.”

Williford’s daughter would be the fifth generation of the Case family to one day run a rebuilt business.

“We’ve got to rebuild, Mama,” Williford said her daughter told her. “Where am I going to get off the bus?”

Mississippi teen already out on bond on a January…