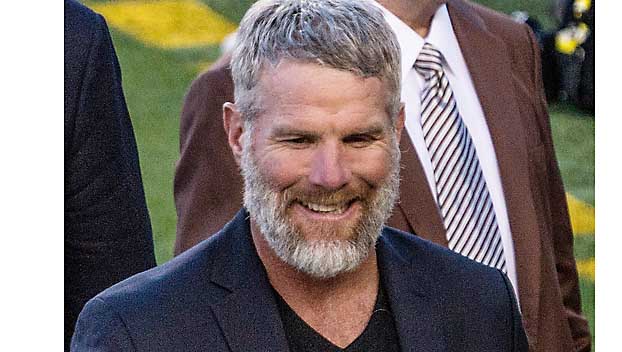 A representative for Brett Favre delivered a $600,000 check to the State Auditor’s Office Monday, an official confirmed Wednesday, a couple weeks after the auditor demanded he repay the welfare funds he took from the state.

Once the auditor uncovered the payments in May of 2020, Favre said he didn’t know the money came from a federal program intended to serve very poor families, Temporary Assistance for Needy Families, and promised to repay the funds. He paid $500,000 initially, the auditor’s office said, but had not returned the additional $600,000 more than a year later.

“The sum demanded represents illegal expenditures of public funds made to you or to entities or combines for which you are legally obligated to pay and/or the unlawful dispositions of public property, including public funds, made with you or with entities or combines for which you are legally responsible to pay,” the letter reads. “These illegal expenditures and unlawful dispositions were made when you knew or had reason to know through the exercise of reasonable diligence that the expenditures were illegal and/or the dispositions were unlawful.”

The contract, which was between two private entities, is not considered a public record and has not been released publicly.

Favre, on the other hand, rejected the auditor’s assertion that he took money for work he didn’t complete, tweeting that he “did numerous ads for Families First.” He also said his agent is often approached to sponsor brands and “this request was no different.” However, his longtime agent Bus Cook told Mississippi Today he had no involvement in the Families First deal.

“Just trying to get the story straight,” Mississippi Today said in a message to Favre. “Do you have another agent?”

Favre has not returned several calls or texts and blocked Mississippi Today’s reporter on Twitter.

The welfare agency hired Mississippi Community Education Center and Family Resource Center of North Mississippi and funneled tens of millions of welfare dollars to the nonprofits to run Families First for Mississippi.

Under the initiative, Mississippi public and nonprofit officials used the welfare money on purchases such as a new volleyball stadium, a horse ranch for a famous athlete, multi-million dollar celebrity speaking engagements, high-tech virtual reality equipment, luxury vehicles, steakhouse dinners and even a speeding ticket, to name a few.

The federal government allows states to choose how much of its Temporary Assistance for Needy Families block grant to spend on cash payments to poor families or on other social programs, and it was under virtually no requirement to report this detailed spending to the federal government.

Favre was one of more than two dozen individuals or organizations — including board members for two of the nonprofits that misspent most of the money — who received demand letters. These demands do not represent criminal allegations.

The office gave each recipient 30 days, until Nov. 11, to return the money before the auditor will turn the case over to the Mississippi Attorney General’s Office, which has the option to pursue civil litigation against the individuals or companies. Favre is the only individual who has returned funds as a result of the demands, but the auditor will still refer his case to the Attorney General’s Office for the unpaid interest.

The Attorney General’s Office and the welfare agency have also hired their own counsel, former U.S. Attorney Brad Piggot, to pursue civil demands against the recipients in order to claw back as much of the misspent funds as possible. The department expects Piggot to file litigation in coming weeks.

This story is reprinted with permission from Mississippi Today.