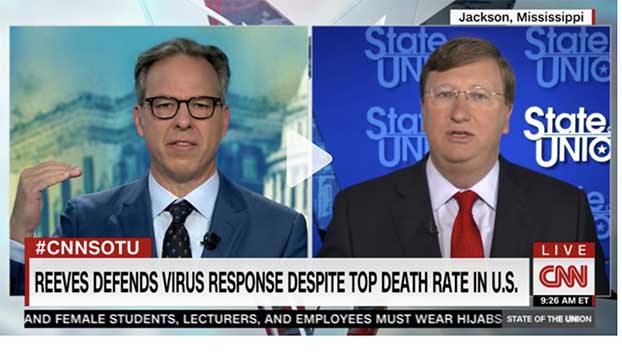 Tapper tried to take Reeves to task over the news last week that Mississippi now has the highest per capita COVID-19 death rate of any state in America.

Reeves never directly answered Tapper and never said he planned to change anything, despite Tapper continuing to press on Reeves.

“We spiked at about 3,600, we’re now half that,” he said. “As you know, unfortunately, fatalities is a lagging indicator. Timing has as much to do with that statistic as anything else.”

Reeves then attempted to turn the conversation to focus on national politics and alleged that President Biden’s administration is limiting the supply of COVID-19 treatment monoclonal antibodies in Republican-led states like Mississippi.

Tapper turned the conversation back to the number of deaths.

“It’s sad, and it’s horrible,” Reeves said. “My heart breaks for all 9,000 Mississippians that have passed away.

“Over the last two weeks (Mississippi coronavirus cases) has declined, they’ve been cut in half from 3,600 to 1,800,” Reeves said.

“So you think this is successful? Tapper asked.

“Now you want to talk about a lagging indicator which is sad and it’s horrible,” Reeves said.

“You seem to be very, very activated when it comes to fighting the mandate from the federal government,” Tapper said. “Your way is not working and whether you say it’s a lagging indicator or whatever your argument is, Mississippi now has, if it were its own country, the second-worst per capita death rate in the world, behind only Peru.

“And I’m saying ‘Are you going to try to do anything to change that?’ and I’m not hearing an answer.”

“Mississippi has taken action,” Reeves said. “Mississippi has seen a significant uptick in the total number of Mississippians that have gotten the vaccine. Our case numbers have fallen dramatically in the last two weeks.