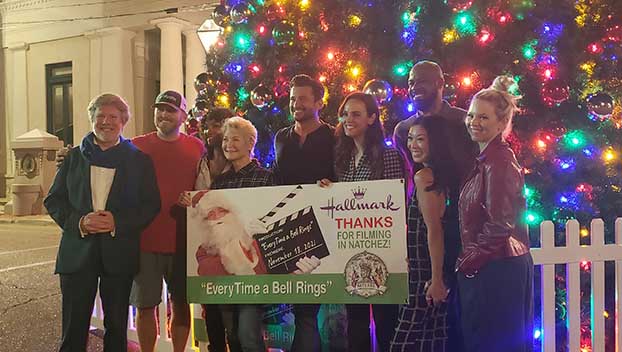 Christmas came early for the Natchez community this week.

As Mayor Dan Gibson hosted a special tree-lighting send-off event for the cast, producers and crew of the Hallmark Christmas movie recently filmed here, producers announced plans to film a second movie in Natchez this year.

Daniel Lewis, the producer of “Every Time a Bell Rings,” scheduled to premiere Nov. 18 on the Hallmark channel, said he and his crew could be back in Natchez for the premiere and plan to start working on another Christmas film in December.

“It’s going to be called ‘Christmas in the Quarter,’ but instead of filming it in New Orleans we’re going to be bringing it to Natchez,” Lewis said.

As a result of the filming here, Gibson said the Christmas decorations throughout downtown Natchez will remain up through Christmas. As is tradition, there will be another official lighting of the tree at the intersection of Main and Commerce streets at the end of November, he said.

Visit Natchez Executive Director Devin Heath said as people are seeing the Christmas decorations up and learning why they are up so early, residents want to see and learn more about places in Natchez featured in films.

“The Visit Natchez team is actually working on a program where we’re going to have tours and information where people can go out and visit the sites that are in the movies. We’re going to start with this Hallmark movie, but we also want to include the locations for ‘Rumble Through the Dark’ and some of the previous movies as well.”

Heath said Natchez is becoming the Hollywood of the South.

“You’ve seen and heard all the excitement that is going on around Natchez. The fact that Daniel Lewis is pulling a production out of New Orleans to come to Natchez speaks volumes for what we have to offer, the variety of location and just how welcoming this community has been to the production.”

Before the tree was lit on Thursday, cast members of “Every Time a Bell Rings” shared some of their favorite things about Natchez.

Their first answer was the people here. And “the food is a close second,” said Wes Brown, who plays Liam in the film.

“And honestly the community,” Lewis said, chiming in. “We couldn’t have done this without the community and their support.”

Lead actress Erin Cahill added, “You guys have been so amazing and we love you guys. You’ve embraced us like no community I’ve ever worked in.”

It’s too soon to tell the level of impact the film will have on tourism as word about the Christmas movie is still, “just getting out,” Heath said.

“Those that are coming to visit, they hear about the movie and see the Christmas decorations up in September. They’re shocked and excited about it and all of the sudden that brings a whole other level of interest in Natchez that they didn’t know they had here,” he said.