Mississippi hospital leader: ‘If there were a bus wreck of kids, we would not be able to take care of all those kids’ 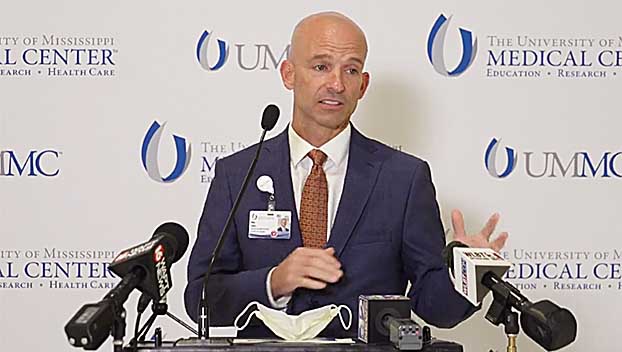 Mississippi health care officials said Wednesday they are scrambling to keep up with the growing surge of COVID-19 patients that have maxed out hospital resources and that the state’s health care system could fail if something doesn’t change quickly.

“Since the pandemic, I think the thing that hospitals have feared the most is just total failure, total failure of the hospital system,” said Dr. Alan Jones, associate vice chancellor for clinical affairs at the University of Mississippi Medical Center, the state’s largest hospital. “If we continue that trajectory within the next five to seven to 10 days, I think we’re going to see failure of the hospital system in Mississippi.

“Hospitals are full from Memphis to Gulfport, Natchez to Meridian. Everything is full,” Jones said.

“School is starting back,” Jones said. “If there were a bus wreck of kids, we would not be able to take care of all those kids at this hospital.”

Jones said UMMC’s pediatric hospital was full and that 10 children were being housed in the emergency room, awaiting a bed. Six children were in ICU rooms and four were on life support, the hospital reported.

The state is setting up a mobile field hospital in a parking garage of the University of Mississippi Medical Center in Jackson and is asking for federal emergency disaster assistance.

“We’re in the midst of a very serious situation,” said Dr. LouAnn Woodward, who heads UMMC.

A team of approximately 30 to 35 federal employees is en route to Jackson to help UMMC staff with caring for patients in the field hospital.