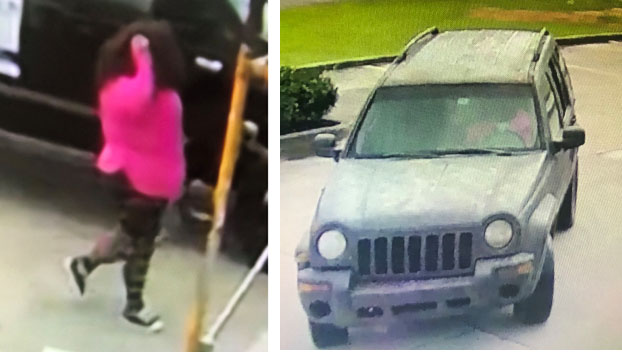 According to a release from the Picayune Police Department, the bank robbery occurred at the First National Bank branch located at 721 Cooper Road on Monday at 3:32 pm.

Officers arrived on scene after being dispatched to a call that a hold up just occurred at the bank.

Witnesses stated that an unidentified black female entered the bank and walked up to one of the tellers and presented a note that stated she was demanding money. After receiving an undisclosed amount of money from the teller, the suspect left the bank and drove away in a black Jeep Liberty.

It appears as though the vehicle was spray painted using a flat black paint, but may have been red at some point since red paint was visible at the back of the vehicle where the spare tire mounts.

The suspect left the area in an unknown direction.

The suspect was wearing a pink top, multicolored leggings and appeared to be wearing a wig, the release states.