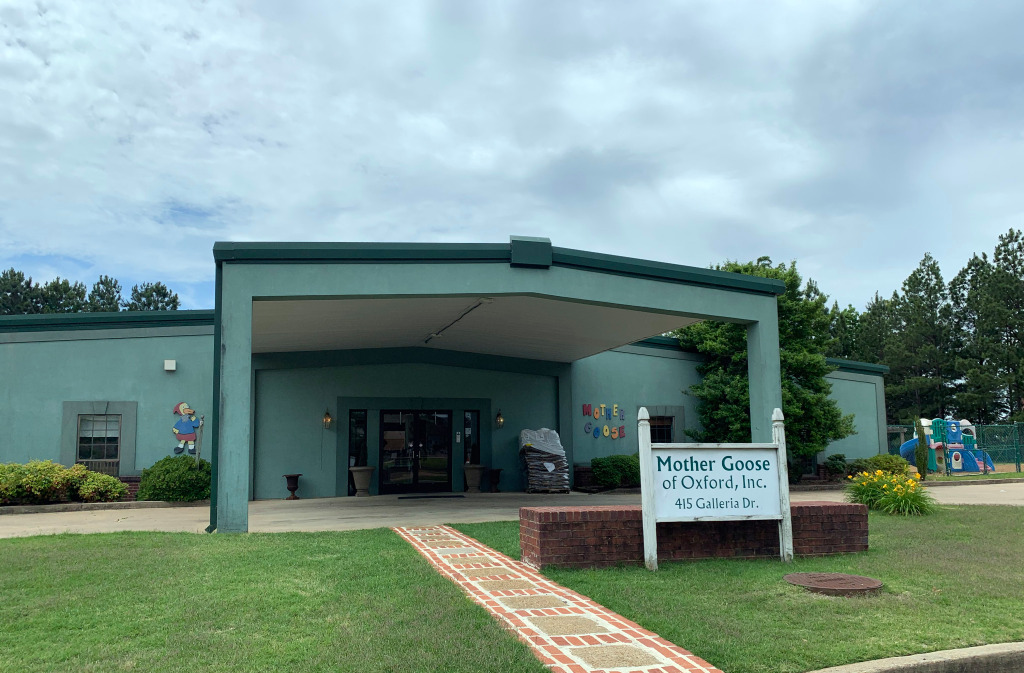 A wrongful death lawsuit was filed in the Lafayette County Circuit Court against the Mother Goose daycare in connection to the infant death last November. The lawsuit claims neglegence on one of the daycare’s employees, resulting in the infant’s death. (Jake Thompson/Oxford Eagle)

A wrongful death lawsuit was filed in Oxford on Friday against the former Mother Goose Daycare in regards to the death of an infant in its care last year.

The lawsuit was filed with the Lafayette County Circuit Court on behalf of Joe and Jenna Hastings and seeks unspecified punitive damages in the wrongful death of their nine week-old daughter, Brynlee Renae Hastings. The complaint states the infant was left “neglected and untouched” for approximately 35 minutes while swaddled, face-down on the floor of the infant room of Mother Goose daycare on Nov. 17, 2020.

In December 2020, the Oxford Police Department made an arrest in the case and charged Amy Rogers, 23 of Grenada, with culpable negligence manslaughter as a result of the investigation that began on Nov. 17 at Mother Goose of Oxford daycare, located at 415 Galleria Drive in Oxford. The daycare has since closed.

The incident in November was not the first time Mother Goose was made aware of Rogers’ “failure to provide proper care for infants,” according to the complaint. According to MSDH records, in January 2019 a family withdrew their three-month-old son from Mother Goose after only five and a half days in Rogers’ infant classroom. Due this incident happening pre-COVID, the family was able to enter the facility and see Rogers’ classroom and the care their child was receiving, including Rogers placing infants on their stomachs and leaving them to sleep outside their cribs on soft mats, according to the complaint.

The Hastings family did not have the ability to enter the facility due to COVID-19 restrictions last year.

Rogers, Hoover, McCollum and the Valles are all listed as defendants in the complaint, which did not ask for a specific monetary amount in punitive damages but requests a jury decide the amount to be awarded if they rule in the Hastings favor.

According to the complaint, video footage of the infant room in question where Hastings was that afternoon was obtained by OPD and the Mississippi Department of Health (MSDH), which is the regulatory body overseeing daycares in Mississippi. The complaint goes on to give a near minute-by-minute account of what happened during the 35 minutes in question.

“Byrnlee was the youngest and smallest infant in Rogers’ classroom,” a portion of the complaint reads.  “The other infants in the room were able to independently roll over, crawl, or walk in a walker. Brynlee was completely dependent on Defendants to care for her and protect her from harm because, even among the other children in the room, she was the least capable of physically caring for or protecting herself.”

At approximately 2:12 p.m., McCollum “swaddled Brynlee and placed her on her back on a cushioned mat on the floor,” which was described in the complaint at best as a “dog bed” and was cushioned and soft around the edges. At 2:15 Rogers returned and McCollum left the room and for approximately the next hour “Rogers paid no attention to Brynlee,” stated the complaint.

Around 3:17 p.m. Rogers interacts with Brynlee “for the first time in over an hour,” where she re-swaddled her and wrapped her to where her arms were pinned to her sides and her legs and feet were bound within the swaddle. The complaint goes on to state  Rogers flipped Brynlee onto her stomach and “pushed her head into the dog bed” and walked away. For the next 18 minutes, Brynlee “fought for her life,” according to the complaint.

During the “18-minute struggle,” Brynlee’s body could not circulate enough oxygen through her blood, which resulted in her lungs, brain and heart to slowly shutdown, according to the complaint. At 3:35 p.m. Brynlee stopped struggling and laid motionless and remained face down on the bed, which was a few feet away from Rogers who was sitting in a rocking chair on her phone at times. None of the other defendants listed entered the room to check on Rogers or the infants during those 18 minutes, according to the complaint.

At 3:52 p.m., Rogers checked on Brynlee. When Rogers rolled Brynlee over she saw Brynlee’s face “covered with blood,” which was caused by hemorrhaging due to suffocation, according to the complaint. Rogers then picked up Brynlee and ran out of the room and at 3:55 p.m. 911 was called by one of the Valles to report a three-month-old bleeding but was unable to identify where the blood originated. The complaint states that on information and belief, Hoover began administering CPR to Brynlee.

An ambulance arrived and transported Brynlee to Baptist Memorial Hospital-North Mississippi where she was later transported Le Bonheur Children’s Hospital in Memphis after doctors managed to find her pulse. The following morning, the neurosurgeon staff evaluated Brynlee and determined she would not recover from the injuries sustained due to the oxygen starvation. A little over 25 hours after she was swaddled and placed in the bed, Brynlee was pronounced dead.

Mother Goose sent out daily reports to parents of the children under its care and on Nov. 17, 2020, the Hastings received that day’s report while sitting at the hospital. The report did not mention the afternoon where their child was swaddled and lying face down without any care, but the report listed Brynlee as being “checked out” at 5:06 p.m., according to the complaint.