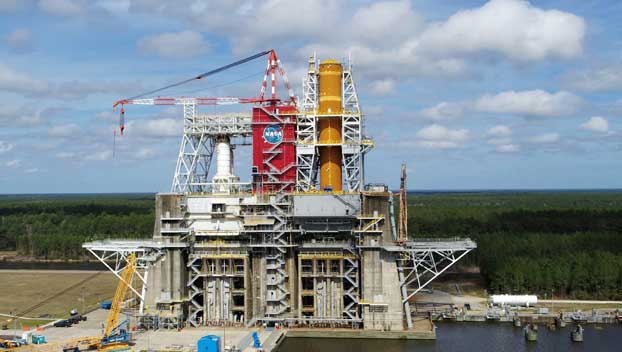 NASA to test engine for ‘most powerful rocket in the world’

NASA is preparing to test-fire engines on Saturday that could send a rocket to the moon in 2022.

The Stennis Space Center, near Bay St. Louis, will test all four engines on its new Space Launch System, the only rocket that will be able to send the Orion spacecraft, astronauts and cargo to the moon in a single mission.

Some have called the test a make-or-break moment for NASA, the Sun Herald reports. The Space Launch System has been in production for close to a decade and is billions over budget.

Once assembled, the system will stand taller than the Statue of Liberty and “will be most powerful rocket in the world,” according to NASA.

The test window opens at 4 p.m. Saturday and will run until 6 p.m. The firing of the four RS-25 engines will produce a combined 1.6 million pounds of thrust.

The sound level will depend on how close an individual is to the test site and weather conditions, according to The Sun Herald. The acoustic level is expected to be about 10-20 decibels higher than during a normal single engine test at the site, NASA said.

Because of the coronavirus pandemic, the public won’t be able to watch the test in-person. Live coverage will begin at 4:20 p.m. on NASA Television and the NASA website, followed by a post-test briefing about two hours after the test.