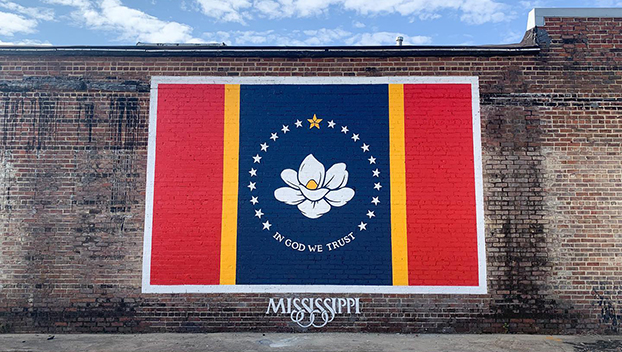 ‘Having that conversation’: Artist paints murals to enhance history

When Cody Crotts, 25, painted his first mural of the new Mississippi flag in his hometown of Corinth, he thought it could be a conversation starter.

When he was approached about painting the flag in downtown Corinth, voters had yet to decide whether to officially adopt the design as the state’s flag. But Crotts was excited to be part of the idea, though he noted the timing was early.

“Either for or against the idea of this design in particular, it’s still the idea of going to vote for change,” Crotts said. “It was a matter of having that conversation. That was really important to me, for the state of Mississippi to go out and vote.”

When the flag vote passed with over 71% support, as of Nov. 5 according to the Associated Press, he saw it as a sign to continue to change and “see where it goes from city to city.”

He’s painted over 10 murals commercially, although he didn’t initially start out to paint murals. Crotts has been an artist his whole life. Growing up, he always had crayons and copy paper on hand, and he never enjoyed coloring books because it limited what he could create.

“It was always this idea of making my own world, whatever I could conceive in my mind, and translate that onto paper,” Crotts said.

He joked that in school, he was the kind of kid who’d draw on notes when he should have been taking them. He entered Northeast Mississippi Community College as an undecided major, but took art classes on the side. It wasn’t until he got out of college that he realized art could potentially be a future for him.
“Art was always the idea or always the mindset, I just didn’t know how to make that a reality as far as a job or opportunity,” Crotts said.

He painted his first mural in 2017, when his high school contacted him to see if he would be interested in creating artwork in the breezeway.

“I was more than pleased to do that because I wanted to give back to my school in a way that I couldn’t do academically, so I thought, what a great way to put a piece of myself, or a piece of my art, for my school,” Crotts said. “That’s kind of how it started.”

After the project, Crotts transitioned from mural to mural. He never advertised his work and said he feels very fortunate that he’s been able to continue creating. After painting a Coca-Cola mural featuring a hand pouring a Coke bottle for one area business, he said other commercial businesses, boutiques and CPA firms reached out.

Because Crotts has a full-time job and often works 50-plus hours a week, painting murals became his after-hours side-gig. But creativity has never been something “pushed upon him.”

“It’s always been instilled in me to create, and it’s kind of evolved from medium to medium. Essentially, I’m going from paper to walls,” Crotts said.

Crotts’ latest creation is a second flag mural in downtown Tupelo, on the side of Reed’s. It’s his first mural painting outside of Corinth, and he sees it as a way of expanding his canvas and gallery of artwork.
On Nov. 12, he was preparing to finish the mural the next day if everything went according to plan. It took him about a week to paint.

Crotts talked about the amount of preparation it took to create the mural due to it being an older wall. He views creating murals as “adding something new” rather than taking away the history.

“Essentially, this wall and everything it stands for and its history, is preserved in these bricks. Nothing changes,” Crott said.

He extended that metaphor to the subject of the mural itself.

“That’s essentially how I feel about the flag, too. It’s not taking history or what we stand for as Mississippians. It’s more or less adding something new to the conversation,” he said.

He hopes to keep expanding his canvas, to travel to other cities and paint similar flag murals, but said he always wants to branch out with his own ideas. He does not limit himself to just murals for advertising or commercial reasons. He enjoys the act of creation for its own sake.

“My motto is free to create,” Crotts said. “That’s my brand. That’s my motto for life.”