A backlog in autopsies at the understaffed state crime lab is expected to grow and homicide cases are expected to be delayed after Mississippi’s chief medical examiner was placed on administrative leave.

Dr. Mark LeVaughn was placed on leave on Nov. 10, according to a spokesman for the Department of Public Safety. He is involved in an investigation by the Mississippi Attorney General’s Office, though officials have not revealed what the investigation pertains to, the Clarion Ledger reports.

LeVaughn is one of three medical examiners in Mississippi who handle between 1,200 and 1,400 autopsies per year. They are responsible for determining the cause of death in homicides, suicides and accidents that require investigation.

Department of Public Safety spokesman Chris Vignes said in a statement that the two remaining medical examiners along with three contract pathologists are working to ensure that services continue.

Hinds County Coroner Sharon Grisham-Stewart, who is the president of the Mississippi Coroners Association, said that the backlog was so bad over the summer that she was forced to store bodies for two to three weeks before the medical examiner’s office could accept them.

“They were just starting to narrow down and come to an end of the backlog, but with this new development I think the backlog is going back up now,” she said.

Grisham-Stewart said there is currently a one week wait to get bodies processed.

Medical examiners also testify about autopsy results in court, and some experts fear that LeVaughn’s absence will delay criminal proceedings.

Justin T. Cook, president of the Mississippi Public Defenders Association, said that some homicide cases will be delayed as a result. 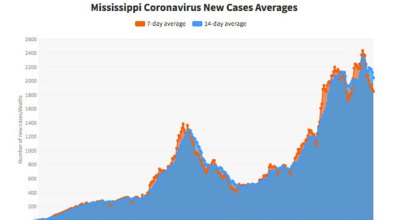 Music created by Mississippi woman will be featured at inauguration ceremonies

U.S. Army soldier arrested in Georgia, charged with plotting to blow up 9/11 memorial in New York