Mississippi teen ‘catches a dream’ with hunt for trophy buck 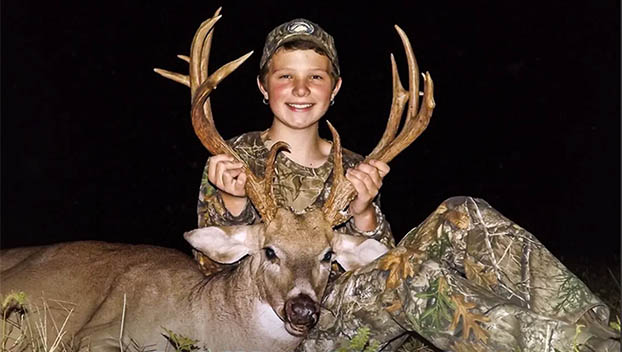 She’s been declared cancer-free, she’s back with North Pike’s soccer team — and she just killed a massive trophy buck in a hunt sponsored by the Catch-A-Dream Foundation.

Anna, 13, of McComb, was diagnosed last year with Stage 2-B osteosarcoma in the knee. After lots of unpleasant treatments, “She is cancer-free,” said her mother, Elly Boyd.

“She’ll go back for scans in November. She’s helping manage the girls soccer team at North Pike because she can’t run. She’s back at school, making good grades.”

All that’s enough to declare 2020 a good year for Anna. But in October she got to top it off by going on a Catch-A-Dream hunt at Little Flat Creek Ranch in the Missouri Ozarks.

Catch-A-Dream Foundation grants once-in-a-lifetime hunting and fishing experiences to children 18 years old or younger who have a life-threatening illness.

Anna went with her mom, her father Mervin and sister Jordan for the four-day excursion starting Oct. 7.
“It was amazing. It was so much fun,” said Anna, who was already a seasoned hunter and fisherman.

On her first morning she got in some shooting practice with her .243-caliber rifle, then did some pond fishing.

At 4:30 that afternoon, she, her dad, guide Steve Davidson of Iowa and ranch host Ed Mareth headed out to a field, where they saw a big buck.

They got into a box stand but the deer vanished. They waited and waited, but when the buck didn’t reappear, they started getting ready to go.

“Anna was all excited and nervous. We all were,” said Mervin.

She took careful aim and shot. “The deer jumps the fence and goes into the woods,” Mervin said.
It was nearly dark by now but they found blood and tracked down the buck, which lay dead.

The deer had a massive 15-point nontypical rack.

However, that morning someone had seen what looked like the same buck, but with an additional tine.
The next day they found a broken tine, 4 to 5 inches long, where the deer had hooked a tree. A taxidermist plans to reattach the tine to the rack.

The rest of the trip was lagniappe: fishing, playing games, hanging out around the camp.

“They just treated us like we were king and queen,” Elly said. “They were very Godly people.”

The rack has yet to be scored officially, but it eclipses anything any of the Boyds have killed.

“Probably for a lifetime,” Elly added.

Communities begin to unfurl ‘In God We Trust’ flag,…