Eta expected to gain strength, hit Cuba and Florida, then turn back into Gulf 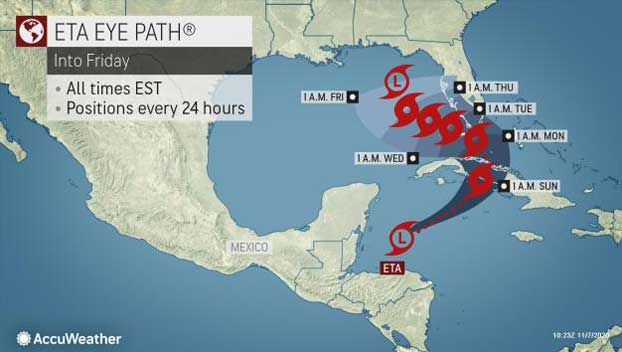 Eta was spinning over the warm waters of the northwest Caribbean on Friday, leaving behind a trail of catastrophic damage and a rising death toll in Central America. The reorganizing tropical system is likely to strengthen and strike Cuba before it churns toward the Florida Keys and possibly the South Florida mainland as a 1 on the AccuWeather RealImpact™ Scale for Hurricanes.

AccuWeather meteorologists warn that Eta could become a strong tropical storm or low-end hurricane before striking the south-central coast of Cuba late Saturday night to Sunday morning with torrential rain, high winds and significant storm surge. People over central Cuba are being urged to prepare for flooding, mudslides and power outages.

As of 4 a.m. EST Saturday, Eta was centered 250 miles west-southwest of Grand Cayman with maximum sustained winds of 35 mph. Present movement is to the east-northeast at 10 mph.

Satellite images showed that Eta was wasting no time gathering steam on Friday as thunderstorms continued to erupt east of Belize and north of Honduras. Waters were as warm as 84 F, which is plenty warm to allow the storm to strengthen.

The amount of rain, wind and storm surge in central Cuba from later Saturday to Sunday will depend on the strength and forward speed of Eta. Rainfall averaging 8-12 inches (200-300 millimeters) with an AccuWeather Local StormMax™ of 16 inches (406 millimeters) are forecast with the greatest amounts over the mountains. Winds of 60-80 mph (97-129 km/h) are forecast over central Cuba with an AccuWeather Local StormMax™ of 100 mph (160 km/h). A storm surge up to several feet (1-2 meters) is possible.

The storm may have another opportunity to strengthen once it emerges over the Florida Straits to the north of Cuba during the day Sunday.

Because of the potential for Eta to regain hurricane status and the likelihood of torrential rain and the potential for life-threatening flooding, damaging winds and storm surge, forecasters have rated Eta as a 1 on the AccuWeather RealImpact™ Scale for Hurricanes in Cuba and Florida. Unlike the Saffir-Simpson Hurricane Wind Scale, which only factors in winds to rate hurricanes, the RealImpact™ Scale takes a broad range of impacts and economic factors into account.

The system will emerge along the north coast of Cuba, most likely during the midday and afternoon hours on Sunday, and gusty winds are expected to raise seas in the waters between the Bahamas, Cuba and Florida. Overwash and downpours could lead to flooding, including in the city of Havana and perhaps as far away as Nassau in the Bahamas.

Officials have been asking Floridians to take precautions ahead of the storm. Crews spent Thursday cleaning storm drains in Miami Beach in anticipation of Eta. Meanwhile, The City of Fort Lauderdale, Florida, distributed free sandbags to residents on Friday.

One southwest Florida resident told AccuWeather National Reporter Emmy Victor that people seem to be more caught up in following election and coronavirus news than preparing for Eta, but long lines were seen at grocery stores as people stocked up on necessities.

“After crossing Cuba later this weekend, Eta is forecast to make a westward turn, likely somewhere in the Florida Straits between Cuba and the Florida Keys or South Florida,” AccuWeather Senior Meteorologist Dan Pydynowski said.

“Exactly where and when Eta makes this turn will determine the extent and magnitude of impacts in Florida, although locally damaging winds, heavy rain and some flooding are likely in at least South Florida and the Florida Keys,” Pydynowski said.

The strength and track of Eta as it nears Florida may be dependent on how far west versus east the storm travels over Cuba and the amount of wind shear present.

Winds won’t be the only factor to determine the storm’s strength. Interaction with Cuba and hilly terrain will cause Eta to weaken as the storm moves northward over the large island.

But even if wind shear prevents the storm from reaching hurricane-force and land interaction greatly weakens the storm, forecasters expect it to be a big rainmaker and pose a number of other threats.

Published with permission of AccuWeather

Mississippi teen ‘catches a dream’ with hunt for trophy…