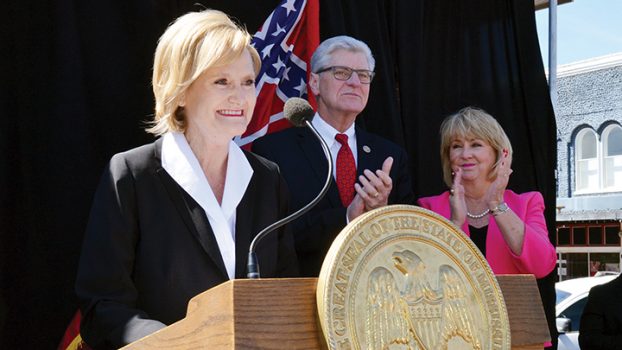 After a rare, brief public appearance on Friday, incumbent Republican U.S. Sen. Cindy Hyde-Smith quickly ducked out, refusing to answer questions about her campaign or any other matters.

With less than a month-and-a-half left before Election Day, Hyde-Smith has done little campaigning or advertising, provided virtually no public access in-person or online, and has so far refused invitations to debates or forums with her opponent, Democratic former Congressman Mike Espy.

Hyde-Smith on Friday afternoon appeared briefly at a press conference with Gov. Tate Reeves and state Agriculture Commissioner Andy Gipson. The three briefly discussed the years-long push for a Yazoo Backwater pumping project to alleviate chronic flooding that has devastated the Mississippi Delta.

The incumbent senator took no questions at the press conference. Afterward, when she was asked by a Mississippi Today reporter if she would answer few questions about campaign, she did not acknowledge the reporter. An aide told the reporter she had another appointment to make.

With an apparent lead in polls, Hyde-Smith’s campaign has laid low, and she has so far done little public campaigning in person or virtually amid the pandemic. A campaign spokesman recently said she has focused more on her job as U.S. senator, but that she has done some virtual campaigning and fundraising online.

Espy has made numerous in-person and online public events, has purchased statewide airtime with two television ads and his camp has criticized Hyde-Smith’s lack of visibility and availability to voters and refusal thus far to debate.

Politicos have surmised that Hyde-Smith, prone to gaffes in the past in open public or media appearances, is hoping to ride her apparent lead and support in deep-red Mississippi for President Donald Trump and avoid voter scrutiny or media questions.

Reeves on Friday announced that the Mississippi Emergency Management Agency has completed an assessment of the impact of flooding in late 2018 through mid-2019 and that he presented that information this week to the Army Corps of Engineers.

The long-pushed pumps project must have federal approval, which it has failed to garner in the past. Hyde-Smith, Reeves and Gipson expressed optimism that the project will move forward, and thanked each other for their continued efforts to move the project forward.

“Over half a million acres was underwater for six months, and almost 700 homes were destroyed or damaged,” Hyde-Smith said. The MEMA report also documented flooding of 548,000 acres, of which 231,000 were prime croplands — a devastating blow to the state’s crucial agriculture industry.