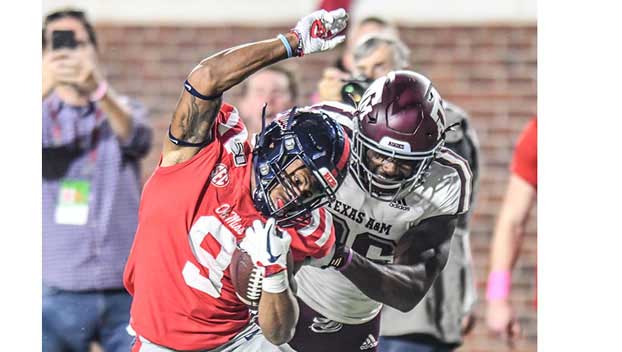 Mississippi running back Jerrion Ealy (9) slips the tackle attempt by Texas A&M defensive back Demani Richardson (26) to score on a 69 yard run in the first quarter at Vaught-Hemingway Stadium in Oxford, Miss. on Saturday, October 19, 2019. (Bruce Newman, Oxford Eagle)

“I just tried to put myself in position to make big plays for my team, said Madubuike, who finished with five tackles, including a tackle for loss and a quarterback hurry. “It’s blocking a ball, sacking a quarterback and all those little things that helped us come out with a win.”

Trailing 14-10 midway through the third quarter, Madubuike teamed with Jhamon Ausbon to force a fumble on a sack of Ole Miss quarterback John Rhys Plumlee. Linebacker Buddy Johnson scooped the loose ball and returned it for a 62-yard touchdown that gave the Aggies a 17-14 lead they never surrendered.

On the ensuing drive by the Rebels, Madubuike swatted away a potential game-tying 35-yard field goal.

“You’ve got to learn to win on the bad days,” Texas A&M coach Jimbo Fisher said. “You have to find a way to come out on top and I give our team credit for that.”

Braden Mann kept Ole Miss in poor field position with five punts for a 52.2 yard average, with a final fourth quarter kick of 55 yards that rolled out at the Ole Miss 1-yard line.

The Rebels (3-5, 2-3) scored on touchdown runs of 69 and 2 yards from freshmen Jerrion Ealy and Snoop Conner, respectively, to build the third quarter lead. The Rebels got a 35-yard field goal from Luke Logan with 1:59 left but failed to recover the ensuing onside kick.

“We had chances to make it a two score game. We had chances all over the place, but we didn’t make the plays,” Mississippi coach Matt Luke said. They made the plays. We played our guts out, but we just missed our opportunities.

THE TAKEAWAY
Texas A&M: Winning on the road prior to a three-game home stand sets up the Aggies to clinch a postseason berth before closing the regular season with road games at No. 10 Georgia and No. 2 LSU.

Defensively, Johnson finished with 10 tackles, while end Tyree Johnson had eight tackles including two for loss, one sack and one quarterback hurry.

“This is a great push for us for the rest of the season,” Madubuike said. We had to bring our own juice and we got the win.”

Ole Miss: Close losses aren’t unexpected with young, untested teams, but the Rebels have been on the short end against Memphis, California and Texas A&M. The Rebels are an exciting team with a promising future, but a postseason bowl berth would require a couple of SEC signature wins at home with No. 2 LSU or on the road at No. 11 Auburn and rival Mississippi State.

UP NEXT
Texas A&M hosts Mississippi State on Saturday.
Ole Miss travels to Auburn on Nov. 2.