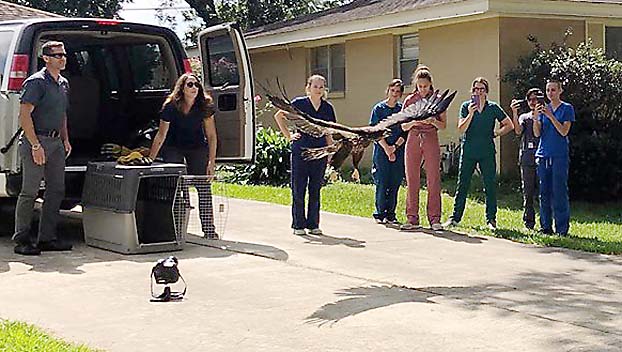 A bald eagle hatched this spring in a New Orleans suburb was released Tuesday in the same neighborhood after two weeks in Louisiana State University’s Wildlife Hospital.

Dozens of neighbors who have watched over the eagle family cheered as the mottled brown bird hopped out of the cage in which it had traveled from Baton Rouge and launched itself into the air in Metairie, Louisiana.

“I have a 1-year-old. It’s been a lot of fun seeing her point up and say, ‘Bird!'” said Christie Penot, whose home is across from the yard where the eagles built their nest. The nest was built a year ago, but this year is the first that eggs have hatched, she said.

The eaglet sat for a while on the roof of a house in the shadow of its nest, fending off a pair of mockingbirds which were dive-bombing it. Then it flew off.

It was heading toward a tree where its parents and sibling had been seen earlier Tuesday morning, said photographer and coastal consultant P.J. Hahn, who has been following the birds since they began work on the nest during the winter.

The eaglet had been taken to the LSU veterinary school’s Wildlife Hospital on May 11. It had been found May 10, walking in a nearby street and barely able to fly.

Bald eagles’ first flights often leave the bird stranded on the ground, but their parents generally keep feeding them until they fly again, according to the Journey North citizen science center at the University of Wisconsin-Madison Arboretum.

However, this bird and its sibling had begun flying in late April.

Veterinarians didn’t find any broken or injured bones, so they think the bird had a muscle injury, veterinary school spokeswoman Ginger Guttner said in a news release Friday.

The birds are clumsy when learning to fly, Hahn said Friday. “They fly into a tree and hit it hard. … I’m sure it probably bruised its shoulder.”

About 40 people, mostly area residents and a few media representatives, were present as the LSU van and its police escort drove up and pulled into a driveway across the street from the nest. Jefferson Parish sheriff’s deputies had blocked off the street and cleared a wide pathway through the small crowd.

People cheered when the bird flew and landed. Claudia Bowman wiped away tears and hugged Christine Pauley-Lataxes, who was cheering and screaming. Someone began chanting “L-S-U! L-S-U!”

‘Saggy pants’ law debated after man shoots himself during…