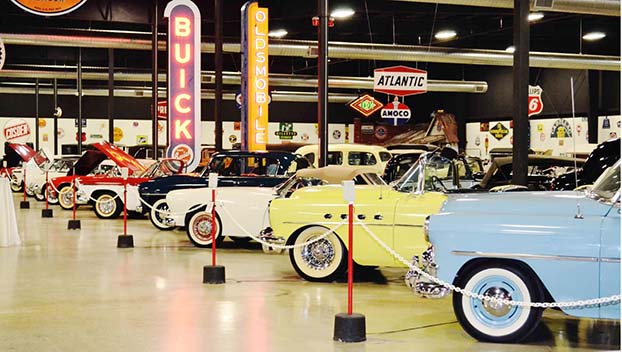 Frank Spain was a puzzle maker. He may have never sat down to whittle jigsaw pieces and maneuver them into place, but each item of his vast collection of artifacts, collectibles and findings make up the greater picture of who he was and what he loved.

From vintage maps and dusty books to rusty license plates and iconic celebrity furniture — automobiles were only one jigsaw piece in the mosaic that was Spain.

And according to his wife, even those objects barely scratched the surface of the true purveyor he was.

“Our life was like a scavenger hunt,” Jane Spain said of her marriage to her late husband. “We traveled a fair amount. And he searched everywhere.”

Frank Spain’s work as an electrical engineer gave him his start in gathering vintage electronics and rare cars.
But that became the tip of the iceberg.

“He never sold anything he bought,” she said. “He invested knowing that his investment would not decrease in value. Everything would simply get rarer and rarer.

“Once we were on a trip to England and he we went in a store. He disappeared forever and came back with an armload of maps. He didn’t have a tremendous amount of knowledge about cartography but from there on he spent many, many years reading everything he could lay his hands on about mapmakers and maps. Then he started fine-tuning the collection. I continue to collect them. Not to the caliber that Frank had them but they keep my attention.”

Part of what attracted Frank to collecting was the hunt, according to Jane.

“He could buy things, but he’d rather go find them or build them,” she said. “Or to fix just fix something. Or pull it apart and put it back together. That was the joy of his life: the chase. He didn’t even know what he would be chasing but he would say, ‘Let’s go look.'”

That chase led him across the U.S., from auctions and estate sales to antique stores and other collectors. Frank had to make connections everywhere to continue his passions.

“He was willing to go pretty much almost anywhere and he was pretty much willing to stop anywhere if something appealed to him,” she said. “Junkyards were a particular fascination, especially if they were rural. Anything that made him appreciate times gone by.”

Frank rebuilt a dilapidated garage within the museum, made from remnants of an old building that had fallen down in Saltillo.

“He saw an old fallen down building and his mind said, ‘Let’s build a garage,'” she said. “Once he had the garage built, he had to fill it with things, so oil cans and kinds of machinery. One thing always led to another with him. He liked his mind working all the time.”

With the invention of the internet, Spain’s love for the rare and precious took on a cyber presence.

“I taught him how to eBay. Our whole life changed that day. We used to go out to dinner regularly but that changed once he learned he had to bid in the last three seconds to win,” she said, laughing.

On a particular trip to Florida, Frank got wind of an auction of items that belonged to writer and director Orson Welles. He sat out to buy his son a desk from the collection.

“Four days later we left the auction with a Penske truck full of furniture, artwork and decor,” she said.

A lot of what was garnered over the years eventually made its way into the Tupelo Automobile Museum in Frank’s personal collection, though not all of it is on display nor will be up for auction in April alongside the cars and vintage signage.

Hundreds of license plates — some dating back as far as 1923 — sit in racks waiting to be flipped through.

“I think he had a plan to decorate one entire wall of the museum in them,” she said.

Jane said Frank’s childlike fascination with items and his curiosity for all things that ticked, clicked or blipped made him who he was.

“I was gifted with 26 years with this man. He loved to be hands on. That was very much a part of who he was. I guess you could say he was really into history,” she said.