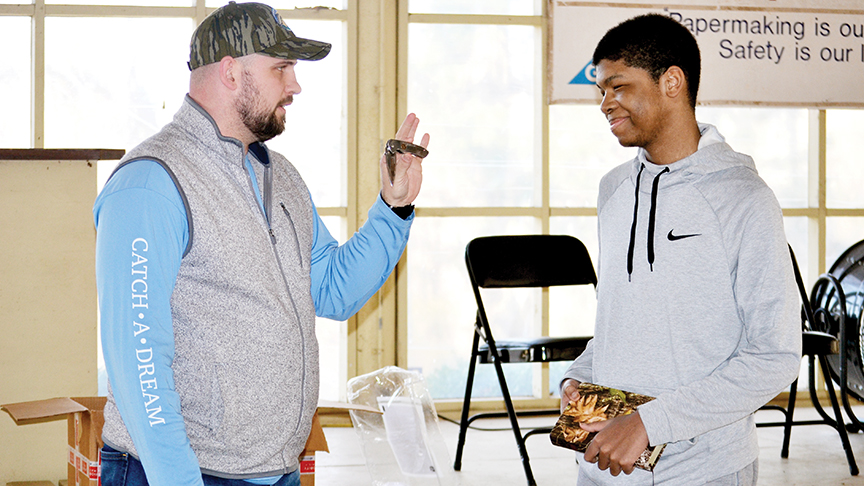 Photo by Donna Campbell Spencer Brunson of Catch-A-Dream presents a knife with the ministry’s logo to hunter Aries Cotton.

He’d never shot a gun before last week, but when the host hunters from the Catch-A-Dream Foundation handed the 14-year-old the 7mm-08 rifle, he was ready.

The doe and the 9-point buck he shot in Monticello? Not so much.

Fourteen-year-old Aries Cotton of Greenville still undergoes chemotherapy for leukemia at Blair E. Batson Hospital for Children, but Thursday, he traded the chemo for camo and took aim.

He hit the doe and after the buck played hide and seek a few times, he downed it, too.

By the time Aries and his mother Irene headed back to Greenville Saturday, they had meat to fill their freezer and renewed peace that God was in control.

The hunt at the Georgia-Pacific facility in Monticello was made possible through the company’s longtime partnership with Catch-A-Dream, a program that is headquartered in Starkville.

The idea for Catch-A-Dream came in 1999 from the late Bruce Brady of Brookhaven, who found comfort in the outdoors as he faced his own battle with cancer.

He drew strength from his time in the woods. Shortly before his death, he shared with family and friends a vision for some type of program that would provide outdoor opportunities to Mississippi youth with life-threatening illnesses.

Brady died in February 2000 and Catch-A-Dream was founded later that year.

The program uses hunting and fishing as opportunities to allow children with life-threatening illnesses to spend time in the outdoors, away from the sterile world of hospitals and treatments. There is no cost to the families.

Georgia-Pacific became a partner in 2002.

“Without that relationship, Catch-A-Dream could not do what we’re able to do,” said operations manager Brian Chisholm.

He presented a token of appreciation to Georgia-Pacific employees Saturday at the Monticello facility for preparing the property for the hunt.

“There’s nowhere else that will do that for us that it’s not already strictly hunting-related, but for y’all to open it up to us means the world and it changes somebody else’s world and we get to be a part of it,” he said.

While Aries was hunting, Irene Cotton was treated to a spa day.

“This is a mother who God chose,” Chisholm said, gifting her with a devotional. “People say the Lord won’t give you anymore than you can handle. Yes, he will. If you trust him, he’s going to give us more than we can handle because he wants us to trust him and let him handle it. I’ve heard this come out of her mouth, ‘Hey, he’s in charge.’ She doesn’t complain, she doesn’t gripe about having to take care of her baby.”

All “junior partners” who go on the hunts or fishing trips are given the same three gifts during the closing ceremony — a blanket printed with Isaiah 40:31 that says “But those who wait upon the Lord will renew their strength. They will soar on wings like eagles; they will run and not grow weary, they will walk and not be faint,” a Mossy Oak Bible with that same scripture as well as a few others highlighted and a folding pocket knife inscribed with “Catch-A-Dream” inside.

Brunson also gave the teenager a plaque with his retired number — 1809 — since he was the ninth application of 2018 and made history.

“I believe you may have set a record for the fastest buck and doe kill,” he said, laughing. “Not only the fastest kill, but the most times a buck has gone in and come back out.”

The Catch-A-Dream program is open to any child in the United State or Canada who is between the ages of 18 and 6 for fishing or 18 and 8 for hunting and has a life-threatening illness.

For more information about the program or to volunteer or donate, visit www.catchadream.org.