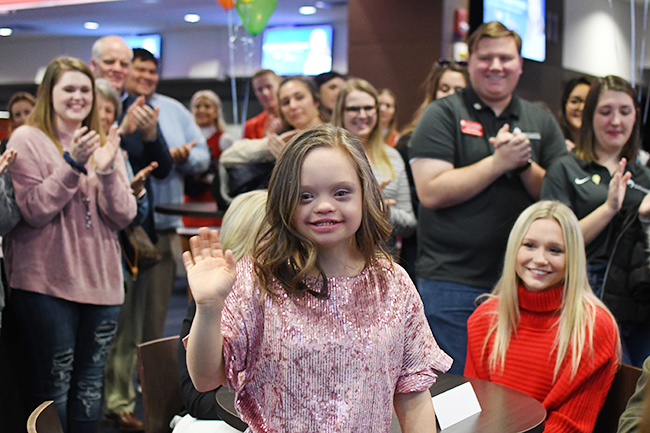 Aubrey Armstrong is announced as the Blair E. Batson Hospital for Children's Children's Miracle Network Hospitals Champion for 2019 during a ceremony at the Pavilion at Ole Miss, in Oxford, Miss. on Thursday, January 24, 2019. (Bruce Newman, Oxford Eagle)

When Aubrey Armstrong took the stage inside the Pavilion at Ole Miss on Thursday she had control of the entire room with her electric personality. The 14-year old was giving a speech to hundreds of family and friends in attendance to see her be named Mississippi’s 2019 Children’s Miracle Network Hospital Champion.

Armstrong was selected out of all the patients treated at the Blair E. Batson Hospital for Children on the campus of the University Medical Center in Jackson. The Children’s Miracle Network looks for a child who has overcome medical adversities to represent their local hospital for that year. Another aspect of the criteria is to find a child who is not camera shy and will be a strong ambassador for their hospital. Those are two things Armstrong excels in.

“(Armstrong) is the perfect champion,” John Clark Packer said. “She is one-of-a-kind for sure and doesn’t let anything get in her way.”

Packer is a coordinator for Children’s Miracle Network at Batson. The program began at Batson in 2005.

Now, Armstrong is an eighth-grader at Oxford Middle School and in the five years her family has lived in Oxford after moving from Jackson, she has become beloved by the city. Oxford Mayor Robyn Tannehill and the entire Oxford High School baseball team were in attendance on Thursday. The support of the community is not lost on Armstrong’s father.

“Obviously it’s an honor,” Brad Armstrong said. “It’s kind of cliché, but Aubrey was born to do this kind of thing. She’s never at a loss for words. …(Aubrey) likes to say she’s Oxford famous. It means a lot to have the support of the community. These kids that have everything else going on, and this is not a priority I imagine, took time out of their day to come over and be here to support her.”

Last October, Armstrong served as Oxford’s ‘mayor for a day’ and spent the day with Tannehill and meeting all of Oxford’s city officials. October is Down Syndrome Awareness Month.

Also in attendance was the current Miss Delta Crossroad, Mary Randall Ivy, who presented Armstrong with her champion’s crown, sash and medal. Ivy, who is from Oxford, is Armstrong’s piano teacher and pageant sister.

Being named the hospital champion comes with the responsibility of being the face for Batson and to promote awareness for the hospital across the state. Armstrong will also help at different fundraising events in an attempt to raise money for the hospital.

Armstrong will also have a chance to attend the Children’s Miracle Network national meeting. It takes place over the course of a week in Orlando and one child from each region of the country will be selected to attend.

This year Children’s Hospital Week is March 18-24 and if Armstrong is not selected to attend the national meeting she will still represent Mississippi for events in Jackson during that week.