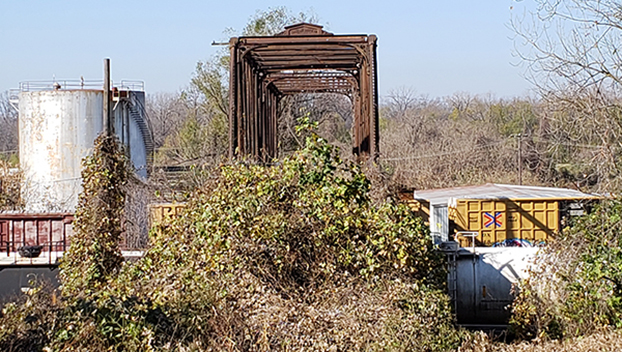 The Fairground Street bridge is listed as the oldest in the state, is on the National Register of Historic Places and is a Mississippi landmark. The bridge, closed and deemed unsafe in 1995, has deteriorated over the years and has become an eyesore, according to Mayor George Flaggs Jr. (The Vicksburg Post)

VICKSBURG — If Vicksburg can get state funding, the state’s oldest bridge could be coming down.

The city’s board of mayor and aldermen Monday approved two resolutions seeking money from the Mississippi Department of Transportation Emergency Road and Bridge Repair Fund to replace the Kemp Bottom Road bridge off Warrenton Road, and for the Fairground Street bridge, which at one time linked Fairground Street to Levee Street.

The resolutions do not request specific amounts, but the cost to replace the Kemp Bottom Road bridge is estimated at $2 million. City officials have no estimate to repair the Fairground Street bridge.

And if the city gets money for the Fairground Street bridge, Mayor George Flaggs Jr. said, “I have every intention of going to (state) Archives and History and ask them to allow us to demolish it.

“It is a blight, it is unsafe and it’s unfair to the residents in that area to have to look at such conditions going home every day. That part of town is just as important to me as Washington Street is.”

Built in 1895, the 123-year-old bridge provided access to Levee Street from the city’s garden district after railroad tracks were built in the 1800s. The Yazoo & Mississippi Valley Railroad, which owned the tracks at that time, built the bridge as part of a deal with the city that allowed the company right-of-way through Vicksburg.

Nancy Bell, executive director of the Vicksburg Foundation for Historic Preservation, said the bridge is listed as the oldest in the state, is on the National Register of Historic Places and is a Mississippi landmark.

The bridge was closed to traffic in 1995 as unsafe. Its approach at the intersection of Pearl and Fairground streets is overgrown with trees and other vegetation, and the crumbling structure crosses over the Kansas City Southern Railroad yard.

City Attorney Nancy Thomas said the Fairground Street bridge was at one time on the State Aid Bridge list, which made it eligible for funding for repair, but it was removed from the State Aid inventory several years after the span was closed.

“We’re going try to get funding (for the bridge),” Thomas said. “We need to do something with the bridge. It’s historic; the railroad is complaining, they’re worried about the bridge. We need to try to find some options.”

There were plans at one time to relocate the bridge to Washington Street near the Jesse Brent Lower Mississippi Museum and Interpretive Center to serve as a pedestrian bridge from Washington Street to Levee Street, but Flaggs said Monday those plans were shelved because the project is too expensive.

“It will cost more money to move that bridge from there to downtown and restore it … it’s cost prohibitive,” he said. “The city of Vicksburg doesn’t have the money.”

The Kemp Bottom Road bridge, which crosses Hennessey’s Bayou, collapsed in July 2017. Kemp Bottom Road is a public road and the main access to Entergy’s Baxter Wilson power plant. Plant workers have been using an emergency road that was built after the bridge collapse.

Engineers said the water entering Hennessy’s Bayou during the flood receded quickly and created the present erosion problem that caused the bridge to collapse.

City officials and the U.S. Army Corps of Engineers Vicksburg District in April signed an agreement enabling the Corps to help the city develop a plan to stabilize the west bank of Hennessy’s Bayou to build a new bridge on Kemp Bottom Road. The city and the Corps will split the project’s $75,000 cost under the agreement.